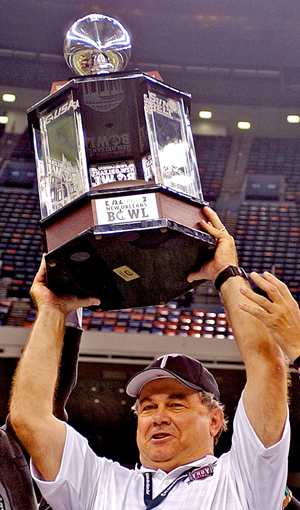 Legendary Troy University football coach Larry Blakeney spoke with The Messenger on Monday ahead of the end of the voting period for the 2023 College Football of Fame.

Blakeney is one of 89 players and coaches from the FBS on the ballot this year and it was his third time being placed on the ballot. To be eligible for induction into the Hall of Fame, a coach must have been a head coach for at least 10 seasons with at least a .600 winning percentage of 100 games minimum.

“I’m honored to be on the ballot and it would be a tremendous honor to be voted into the College Football Hall of Fame,” Blakeney said. “That seems like the ‘cat’s meow’ to me. I’m looking forward to seeing what happens but I’m not going to be crushed if it doesn’t happen either. I’d be very excited for the opportunity if it does, though.”

Blakeney coached Troy State/Troy from 1991 until 2014 and is the all-time winningest coach in Sun Belt Conference and Troy history. During his stint with the Trojans, he led his teams to eight conference championships, seven FCS playoff appearances, four bowl games and he won Conference Coach of the Year on four separate occasions. During his tenure, his Troy teams went a combined 178-113-1 and he helped guide Troy from Division II to Division I-AA (FCS) and then to Division I-A (FBS) during that time, as well.

Blakeney said that he already had a fondness for the school before ever coming to Troy because he had friends that attended the school and his cousin, Frank Elmore, was a part of the 1968 National Championship team.

“To be able to have all that success at a place like Troy was special,” Blakeney said. “I was preceded by Rick Roads and Chan Gailey, which are two really great guys and really great football coaches.

“Credit to them for developing the program and getting that taste up for more success. We were able to take it from there and it was a really good tenure at Troy University.” 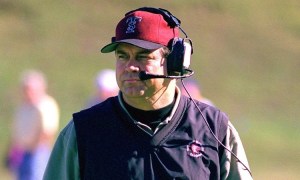 “The chancellor (Dr. Jack Hawkins) told me he was going to do that and I told him, ‘Don’t you ever take it off there before I die,’” Blakeney joked. “That’s another thing (about Troy), we had a great administration and board members that were very positive and supportive and it was definitely a team effort.

Back in April, Blakeney took part in a “Legends Lunch” during T-Day featuring a number of former Troy football legends, which Blakeney said he hopes the school does more of.

“I love them and I really loved that one,” Blakeney emphasized. “It was a real fun deal for me getting to see the people and answering questions and seeing some of my old players.

“It was a good time and I think that kind of thing needs to happen to sort of tantalize the Troy people and bring back those memories, so we can enhance the future.”

Blakeney has been impressed with the new man in charge of the Troy football program, Jon Sumrall.

“I met him and we’ve talked and he’s a really personable guy,” Blakeney said. “He’s like any other coach in America, though, winning games will make the difference in his time at Troy.

“That’s one thing about all the success we had, we sort of got our people accustomed to wins. I told him, ‘You got to win some games down here’ but he knows that. He’s a good guy, I really like him and he’s definitely got my support for whatever that means.”

Voting for the National Football Foundation and College Football Hall of Fame runs through June 30 and those that are to be inducted will be announced in early 2023. The Class of 2023 will be officially inducted at the 65th NFF Annual Awards Dinner in Atlanta, GA on Dec. 5, 2023.