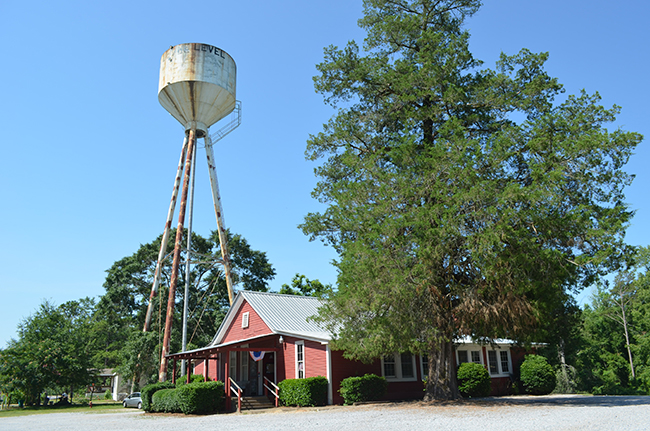 Jaine Treadwell | The Messenger Red’s Little School House Restaurant in Grady will close it’s doors on July 3. Debbie Deese has been in the kitchen at Red’s for nearly 40 years. Dease and her father, Clarence Ray Deese, better known as “Red” run the restaurant. She said they are closing the restaurant in order to spend more time with friends and family.

Debbie Deese was in the kitchen. That’s where she has happily spent many – “most” – of her daylight hours for almost 40 years now. Well, maybe not quite that many. The sunrise hours were spent gathering home-grown vegetables from the garden.

Debbie crossed her arms and sat thoughtfully for a moment.

After nearly 40 years as a successful restaurant off the beaten path, Red’s Little Schoolhouse is closing its doors on July 3, 2022.

Debbie was searching for words that would bring understanding to the decision to close the iconic restaurant.

Debbie Deese works days begin at 5:30 a.m. when she goes to tend the garden and gather fresh vegetables for the restaurant. Then, she goes to the kitchen where she “fixes” foods for friends, neighbors and others she doesn’t know but soon will.

“I like to get out in the restaurant and talk with people,” she said. “They come to eat with us and I don’t want anyone to leave without being welcomed to Red’s and feeling at home here.”

But, some time back, Debbie’s dad, Clarence Ray Deese or, as most people know him, “Red,” broke a bone in his leg and then his hip. As a result, he was somewhat limited in the role he played at Red’s Little Schoolhouse. He was more at home than he was in the restaurant.

Debbie’s time with her dad was limited by her commitment to the restaurant.

“I’ve not been able to stay with my dad as long as I want to stay or as long as he would like for me to stay,” she said. “I started thinking, what if one day, he wanted me to stay and talk a little longer but I had to get back to work, what if that day was …? I couldn’t stand it. I just couldn’t. I couldn’t live with that.”

Debbie said the decision to close Red’s Little Schoolhouse Restaurant was the hardest decision she will ever have to make.

“But it’s the right one,” she said. “Now, there will be time for us to go places and do things together. That’s what is most important now.”

Debbie picked up her guitar and strummed and grinned as she has often done to the enjoyment of those around Red’s tables.

Debbie Deese adores her dad. She is thankful that the two of them have shared most of their workdays together,

But things could have been different.

It would surprise most of Red’s followers to know that he was once a hairstylist.

Perhaps it was fate, not chance, that the Deese duo opened a service station café “out on the highway.

“Back then, there was no self-serve,” Debbie said. “We pumped gas and cooked barbecue that everyone tried and liked. We sold a lot.”

Debbie, laughingly, said a lady on a Mercedes stopped by the café and ask if she could barbeque for 100.

“I said I could,” Debbie said laughing. “I wasn’t sure about how much barbecue to cook so I ended up cooking enough for 300. So, when a day later a gentleman asked if I could cook barbecue for 300, I told him, ‘just did.’”

The man was Jim Folmar, the brother of Montgomery Mayor Emory Folmar.

Debbie had an idea for getting people off the highway.

“We put up ‘Yard Sale! Set up Free’ signs thinking if the set up was free vendors would come,” Debbie said. “And, if we had barbecue, the vendors might eat and the shoppers, too. And, it worked.”

So, based on the belief and the assurance, that “if you have good food, people will find you,” Red’s Little Schoolhouse became a reality.

“We have worked long and hard and we have been dedicated to offering good food and good service to our customers and to our community,” Debbie said. “We have been blessed with dedicated workers. At Red’s we are all family. But, Red’s got a son in Atlanta and an aunt in Huntsville so now we’re going places and to do stuff. “

Debbie added with her familiar smile, “Of course, we’ll have to make pit stops along the way….

Debbie Deese paused and sighed. Again, closing Red’s is the hardest thing I’ve had to do …. It’s emotional. We are so thankful to everyone.”