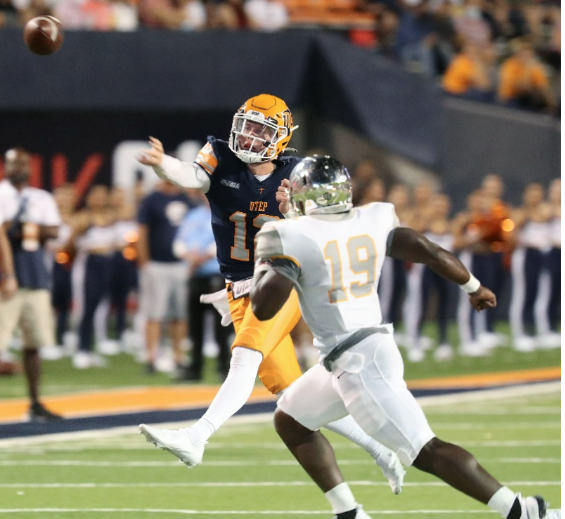 Pike County native Te’Keven Thomas announced this month that he was entering the NCAA Transfer Portal as a graduate transfer and is hoping to land on the roster of an FBS school this coming fall.

Thomas played his high school career at Pike Liberal Arts and Pike County High School before playing at ASA College in Miami, Fla. for a season and then transferring to Bethune-Cookman University in Florida.

Thomas played both running back and tight end in high school but has been a linebacker at the college level. In seven games at ASA College, Thomas recorded 25 tackles, two tackles-for-loss and a fumble recovery. Thomas transferred to Bethune-Cookman but COVID-19 wiped out the 2020 season. 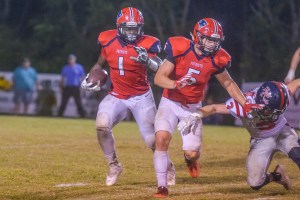 In 2021, Thomas emerged as one of Bethune-Cookman’s top players on defense, recording 72 tackles, eight tackles-for-loss, two sacks, one interception and one fumble recovery enroute to earning Phil Steel second-team All-SWAC honors. Thomas earned his bachelor’s degree from Bethune-Cookman and will have two years of eligibility left in college.

“I’m grateful to have been able to get my degree,” Thomas said of his time at Bethune-Cookman. “I graduated with my bachelor’s degree and I feel like I did my part for the team and I was just trying to find a better situation for me mentally.”

Thomas played in agony for much of the 2021 season after suffering a torn hip labrum, which was originally diagnosed as a “help flexor” strain.

“I appreciate our training staff for sure but I played almost the entire season with a torn hip labrum,” Thomas recalled. “I had to get my leg wrapped every day and I would do physical therapy with the treatment staff throughout the week at practice and I wouldn’t go through as much contact at practices. I would just sort of go through the scheme and game plan. Once it was game time I would do treatments at the hotel or wherever we were. It was like I had to go through this preparation just to play every week.”

Despite the season ending and being able to finally get some rest, Thomas’ hip wasn’t healing going into spring practices.

“I was doing workouts leading up to spring (football practices) and I just felt a restriction in my body and wanted to get it taken care of,” Thomas said. “I got the MRI before graduation and go the surgery the Monday after I graduated. Right now I’m doing physical therapy six days a week and I’m looking forward to being able to play football again real soon.”

Thomas said that when he first went to college, school wasn’t a priority for him but his degree is what he’s most proud of following the tragic passing of his father.

“Whenever I entered college, I was so focused on football that getting my degree wasn’t something that really meant a lot to me,” Thomas emphasized. “Whenever I first got to (Bethune-Cookman) my dad took me up there and everything and that was a real pivotal moment in my life.

“I told him I was going to do what I had planned and get my degree. He passed away from cancer in 2020, so me being able to graduate and walk away with my degree and also have a good football career at the same time meant a lot to me.”

Unfortunately, Thomas won’t be immediately eligible next season without a hardship waiver from the NCAA because he entered the transfer portal after the May 1 deadline for football.

“I just felt so drained from the situation and the atmosphere and everything, so after I got the surgery they didn’t have the master’s (degree) plan I wanted to into either and that played into the decision (to transfer),” Thomas said.

Thomas said his goal is to continue to play Division I football but hopes to make it on an FBS roster and Troy is certainly a place he would like to see himself at in the fall.

“I’m blessed to be in a situation where I have to years of eligibility left,” he said. “I really feel like I can play Division I football at a high level with my ability and my production. I would be very grateful to have the opportunity to come home and play at Troy and it would be a blessing to play in front of my family and my hometown, but any Division I team that takes a chance on me would be a blessing, too.”