Ballot boxes being stuffed for BBA’s ‘Kiss a Pig’ contest 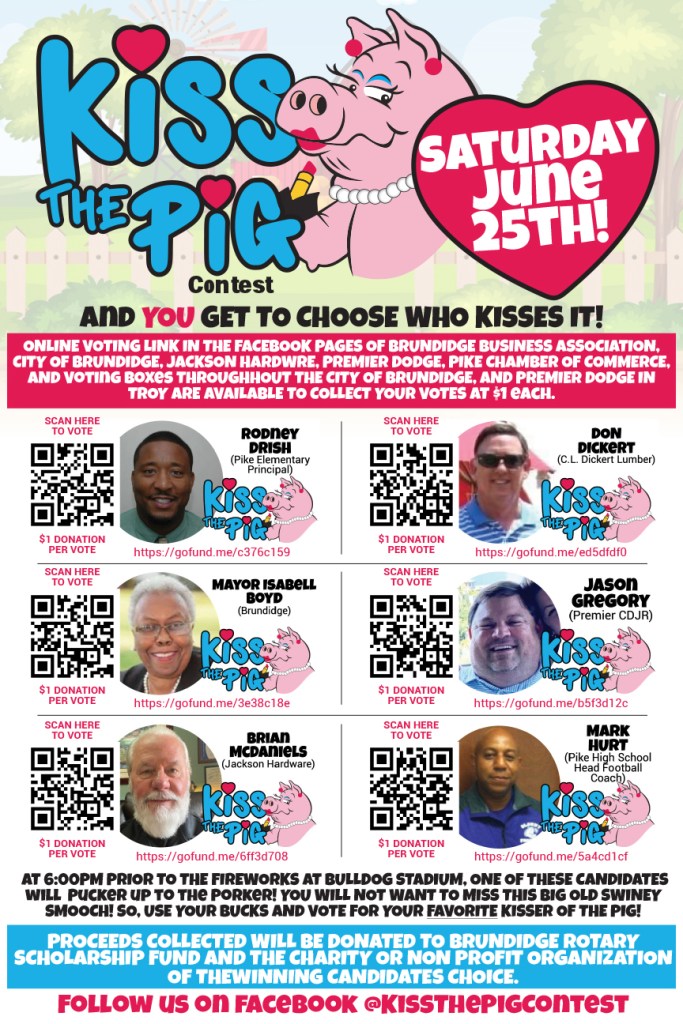 Word around Brundidge is that the candidates in the Brundidge Business Association’s Kiss a Pig Contest are stuffing ballot boxes. But, not their own boxes, but those of the other candidates.

And, the world around town is also that the hog “ain’t too happy” at the possibilities.

But come 6 p.m. on Saturday night, the crowd will gather at the Knox Ryals Pavilion on the grounds of the historic Bass House, to see who will have the honor, or dishonor, of  puckering up to a pig.

If downtown talk is right, then Brundidge Mayor Isabell Boyd just might need to come dressed for the occasion.

But each candidate seems to have a following of voters who are willing to dish out dimes and dollars in their dishonor.

However, McDaniels is one of the six candidates in the contest and he is being closely watched to make sure he’s not stuffing the boxes that are being manned at Jackson Hardware, his place of business.

McDaniels said the Kiss the Pig Contest is very competitive with everyone hoping to be the loser. And, it’s harder to lose than one might imagine, he said.

The ballot boxes heavily guarded so there is not good guess as to who might need to practice puckering up.

“The opportunity to kiss a pig could got to any one of us,” McDaniels said. “But it’s all in fun and the money raised with benefit the Brundidge Rotary Club’s Scholarship Program,” he said. “The club awards eleven, $1,000 scholarship to graduating senior in the local area each year. Over the years, the Rotary scholarships have benefitted many of our young people.