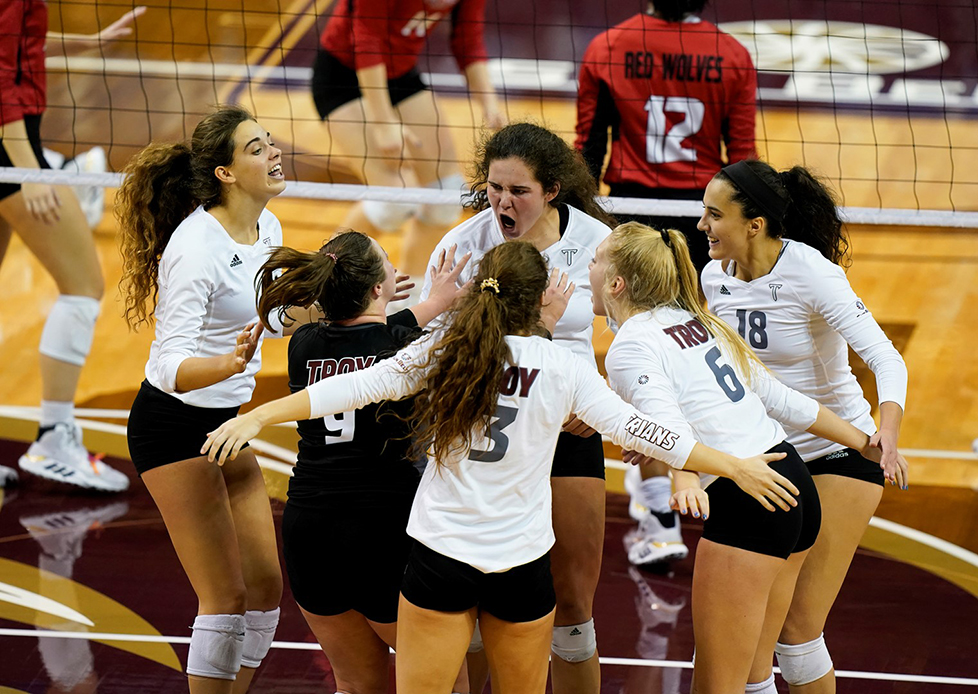 Troy is gearing up for the 2022 volleyball season with a big incoming freshmen class. (Photo courtesy of Troy University Athletics)

The Troy Trojans volleyball team is bringing in six incoming freshmen in the Class of 2022 signing class ahead of next fall.

Among the incoming freshmen, are players from Ohio, Florida, Alabama, Texas and Wisconsin with a number of the players not only earning individual honors but boasting state championship rings, as well. 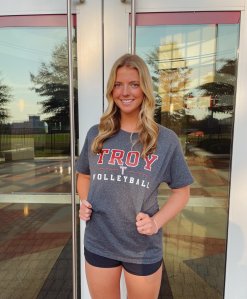 Ella Broadhead was a star player for Bayside Academy in Daphne. (Submitted photo)

Ella Broadhead is the only Alabama native in the Class of 2022 but was an elite player in the state, helping guide Bayside Academy to four straight state championships in three different classifications. Bayside Academy won the Class 3A State Championship in 2017 and 2018 along with the Class 4A State Title in 2019 and the Class 5A State Championship in 2020. Broadhead totaled 1,981 kills, 359 total blocks and 324 aces with a .401 hitting percentage in her high school career. She was selected to the Alabama Costal All-Regional Team, first-team all-state and was the MVP of the North vs. South All-Star game. She was also named one of the top three volleyball players in the entire state by AL.com following the 2021 season.

Sara Bates is a Cincinnati, OH native that was a first-team All-Conference selection for 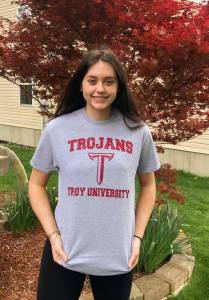 Seton High School, recording 381 kills, 300 digs and 38 aces in her senior year. Maleah Howe comes to Troy from Oconomowoc High School in Wisconsin, where she earned all-conference honors in 2019 and 2020 and was first-team all-state in Division I in 2020 along with being named one of the Top 14 freshmen in the nation in 2019. In her career, she totaled 776 kills, 109 blocks and 600 aces in three seasons.

Troy has two players coming in from the State of Florida in Amiah Butler and Olivia Grantham. Butler was a star for Pensacola Catholic High School where she was a four-time district champion and Player of the Year. She was also the USA Today Volleyball Player of the Year during her junior year and earned first-team all county all four years in high school. Grantham was a star player for Buchholz High School her freshman and sophomore years before starring for Trinity Catholic School in her junior and senior campaigns. The Ocala, Fla. native helped guide Trinity to a Class 3A State Championship in 2020 and earned 160 digs and 50 aces in 112 sets during the season. Her father, Todd Grantham, is a longtime football coach who has coached a number of college and NFL teams. He currently serves as a defensive analyst at the University of Alabama. 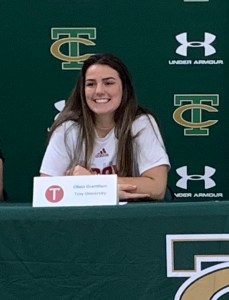 The final addition to the recruiting class is Comal County, TX native Jaci Mesa was an all-district and all-state player for Smithson Valley High School. Mesa surpassed 100 career digs in her senior season and also broke the school’s single game record by earning 40 digs in a single game. She’s also a star in the classroom, earning Academic All-District twice.

Troy is coming off an 18-13 season last year but loses four of the top players from the 2021 team as seniors Cheyenne Hayes, Avery Cason, Caitlin Cooper and Lacey Jeffcoat have all departed from the team with Jeffcoat transferring to Mississippi State. Hayes ended her Troy career as the school’s all-time kills leader. Still, Troy returns All-Sun Belt selections in senior Amara Anderson and junior Julia Brooks. 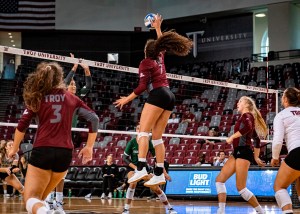 Julia Brooks (7) is one of two returning All-Sun Belt players for the Trojans. (Photo courtesy of Troy University Athletics)

Brooks is coming off a career season as a sophomore in which she was the only player in the Sun Belt to finish in the Top 10 in four different statistical categories. She led Troy with 353 kills and accumulated more than 10 kills in 19-of-27 games, including 24 kills 26.5 points in a match against Georgia Southern. She also earned 27 solo blocks on the season, which was good enough for fourth most in school year. Anderson needs just 469 assists to become the all-time assist leader in Troy history. She currently has 4,502 career assists and is one of just four players in Troy history to have both 3,000 assists and 1,000 digs in a career.