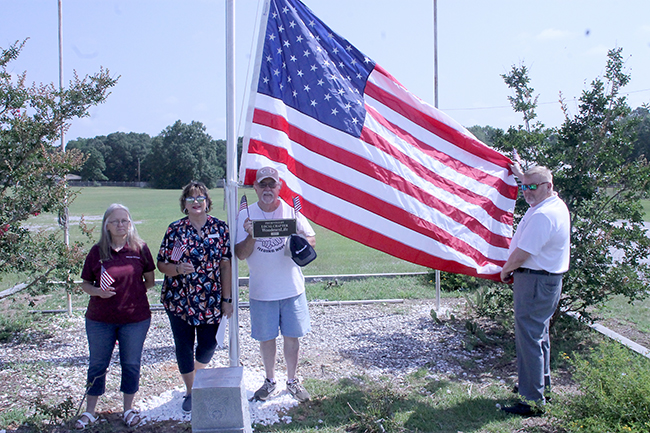 In representing Chapter 420, Kim May said it was an honor to have the opportunity to present an American flag to the local Shriners Club.

“WoodmenLife is a not- for-profit company with nearly 1,000 local chapters and more than 700,000 members who are dedicated to charitable, patriotic and civic clubs,” May said.

“Our chapter is responsible for many project that have benefited our community. We also strive to promote good citizenship by recognizing outstanding citizens who have performed a valued service with achievement awards.”

May said one project of Chapter 420 of WoodmenLife is presenting flags to other nonprofit organizations, including veterans’ homes, Scout troops and schools.

“In fact, WoodmenLife is one of the largest presenters of American flags in the country,” May said. “We believe that the best way to promote the ideals that made our country great is to make our flag a constant visible reminder of the sacrifices of those before us. We acknowledge their commitment and honor their courage.”

Each year on June 14, America celebrates the birthday of the Stars and Stripes.

May said, on June 14, 1777, the Second Continental Congress meeting in Philadelphia adopted the resolution that read: “that the flag of the United States be 13 stripes, alternate red and white, that the union be 13 stars, white in a blue field representing a new constellation.”

“The American flag of today retains the 13 red and white stripes,” May said. “Red signifies courage and white represents love of liberty and purity of purpose.

“The 50 stars on the field of blue represent the union of the 50 states-and blue is also an indication of loyalty among them.”

The ultimate goal of WoodmenLife members is to inspire love and pride in country by presenting flags with honor and respect and promoting patriotism.

“Especially on Flag Day as we honor the history and heritage of this great nation which our flag represents,” May said