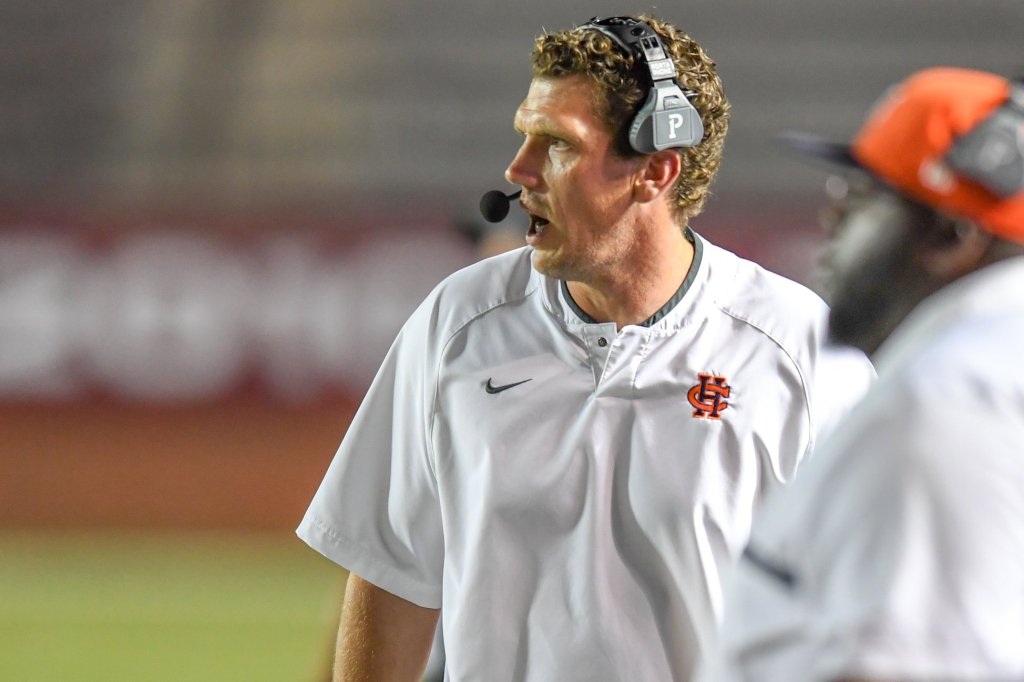 Pike Liberal Arts School’s new football coach Travis Baxley has hit the ground running as he takes over the program, and he discussed his goals for the Patriots and his reasons for returning to Troy with The Messenger on Thursday.

Baxley has actually lived in Troy with his family since 2016 when he became an assistant coach at Charles Henderson High School. Even after he took a position at Pike Road, as defensive coordinator, he and his family remained in Troy. His knowledge of the Troy area was just one of the reasons that drew him to PLAS.

“I’ve been in the Troy area for several years now, working at Charles Henderson, and then we stayed when I went to Pike Road,” Baxley recalled. “I know the reputation and I know the community here and I know the type of kids and athletes we have here.

“As soon as I heard (PLAS) was transitioning to public school ball, I knew immediately that this is a place you can build a championship program at. That’s what I was attracted to and opened my eyes to it.”

Much of Baxley’s goals for the Patriot football program hinge on development, whether that be developing individual players or the program as a whole.

“Our goals here first, is to go to work every day, improve the program, put in the work and the attention to detail and develop our athletes,” Baxley said. “We want to develop our program and maximize our potential in doing so. That’s the goal no mater where you are and then you let the chips fall where they may. Go to work and make sure we get everyone in the program to be the best versions of ourselves that they can be.”

While the Patriots are coming off back-to-back AISA State Championships, PLAS is now entering into AHSAA competition and the 2022 Patriots will not look like the 2020 or 2021 teams. A number of players from those teams have graduated and others have transferred out. Baxley, though, said he is only concentrated on the Patriots still wearing “Pike Liberal Arts” across their jerseys.

“You always want as much participation as possible in your school but we’re not crying over kids that don’t want to play here,” Baxley flatly said. “We value the kids that value us and we’re going to put our time and energy into our in-house kids, develop them and develop the core of our program and the culture of our football program around the kids that we have in-house. That’s the way it should be and we’re happy and elated with the players that walk through these doors everyday.”

Baxley has been a defensive coach for the majority of his coaching career and brings a defensive mind that helped Pike Road become one of the top defenses in Class 5A last season, but he also has new plans for the Patriot offense.

“We’re going to tailor the offense to the type of athletes we have,” Baxley emphasized. “In the past few years they’ve been a spread team and I don’t know that’s who we are now.”

Baxley pointed out that many teams across the state are reverting back to a more power running style of offense and that he believes that style fits the athletes PLAS currently has, as well.

“If you look at it, 20 years ago the evolution of the game was (to go) from more condensed type of formations to a more open, empty (backfield) type of look stretching people laterally,” he continued. “In the last five years the game has sort of tightened back up. If you look at the state championship winners of the last five years, regardless of level, you’re seeing a lot more tight ends, two backs, ‘21’ (two running backs, one tight end formations) and ‘22’ personnel (two running backs, two tight end formations) groupings, and adding gaps to the line.

“That’s the way the game is going anyway. I think that suits us perfectly. We need to get people in a phone booth and be great inline blockers and that requires a great offseason program. If you are going to play that style of football you have to be more than fast. You have to be strong and tough and that’s what we intend to be.”

Baxley and his Patriots will get started on their offseason program this coming Monday and he said that he’s already working on setting up organized team activities (OTAs) and 7-on-7 competition for the month of July.