Mims Creek: An end in sight? 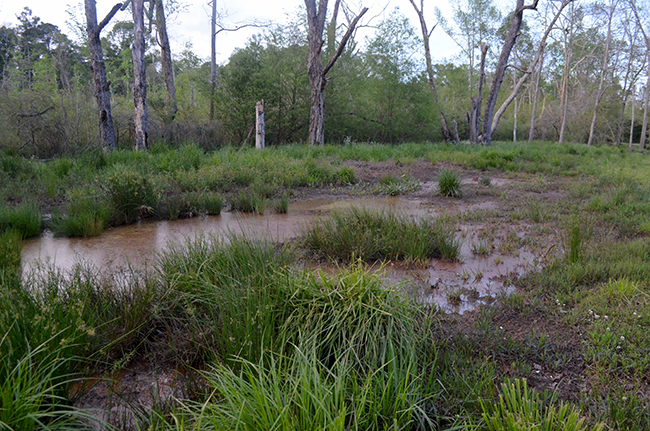 Jaine Treadwell | The Messenger Flooding along Mims Creek has caused problems for residents in Brundidge for more than a decade.

When the Pike County Commission voted on Monday night to provide funding to the City of Brundidge Mims Creek restoration project in the amount of $20,592.25, there was joy on Johnson Street.

Maxine Dubose, a resident of the area of the city that has been plagued by the creek situation for nearly 12 years, was cautious in her joy.

“Oh, I hope this is the beginning of an end to the problem that we have endured for so long,” Dubose said. “It will be such a blessing to able to walk in my backyard again and plant flowers. I am very hopeful.”

Margaret Ross, City Council Member District 3, said the residents in her district have had to contend with the Mims Creek situation for way too long.

“The creek has been an ongoing problem for more than 10 years,” Ross said. “There is no way to describe what these residents have had to contend with. When it rains, their backyards are like a swamp, with mosquitoes and snakes. One resident’s clothesline is underwater at times.  It’s time for the city, to do what has to be done to make this right.”

Mims Creek is in Pike County Commission District 4. Commissioner Chad Copeland said he understands the concern of the neighbors and the need to resolve this long ongoing problem.

“The City of Brundidge asked the Commission to help with the match money and the commission was willing to do so,” Copeland said.

“The city was working on the project while we were waiting to hear on the grant application.”

Commissioner Cynthia Pearson, a resident of Brundidge, is familiar with Mims Creek and how it has adversely affected the Johnson Street area.

“This situation has been going on much too long and I am proud that the Pike County Commission has contributed to the efforts to do what is necessary to solve the problem.”