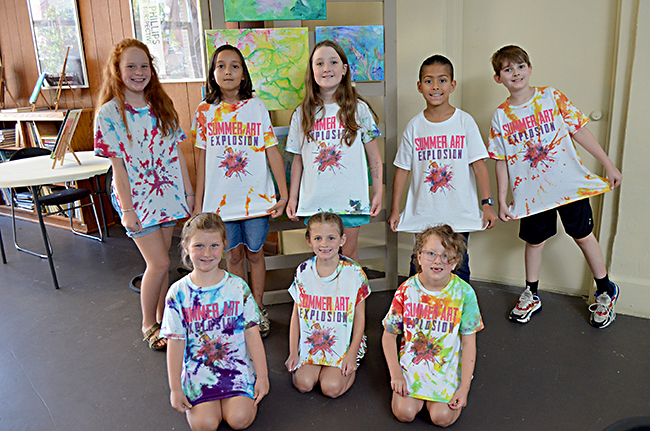 Jaine Treadwell | The Messenger Call it a drama or play or by any other name, and it’s just as much fun. The youngsters who participated in session-one of A Summer Art Explosion where the cast members for the Thursday morning drama and also designed and painted the stage backdrop.

A Summer Art Explosion has occurred on East Walnut Troy Street in downtown Troy. The Explosion was felt at Art by the Track where young artists were at work and also at The Studio where the youngsters were experiencing the wonder of movement.

On Thursday, the students in the art classes, led by Day Barnes, and those in the drama and movement classes led by Reagan Gross, were closing out what they all said was a wonderful week of art and exploration, better said, “A Summer Art Explosion.”

Barnes said the weeklong Summer Art Explosion opportunity was enjoyed by all students as they learned about color, about shapes, about movement and about drama, or “pretending,” as one student said.

After completing a “so much fun” art project, the students went next door to The Studio where they were to perform a drama- “that’s a play,” they explained. The young artists exhibited pride in the backdrop for the “drama” and with good reason.

The students planned and painted the stage backdrop for the drama, in which they would be the main characters. Barnes and Gross said the students were very eager to learn and had interesting and creative ideas.

The teachers were in complete agreement that the Johnson Center for the Arts’ Summer Art Explosion resulted in greater interest in and enthusiasm for art, for drama and for creative movement.

“We are looking forward to next week and the second Summer Art Explosion session,” Barnes said. “Hopefully, next summer, we will have more opportunities for young students to be a part of a Summer Explosion of art, movement and drama.”