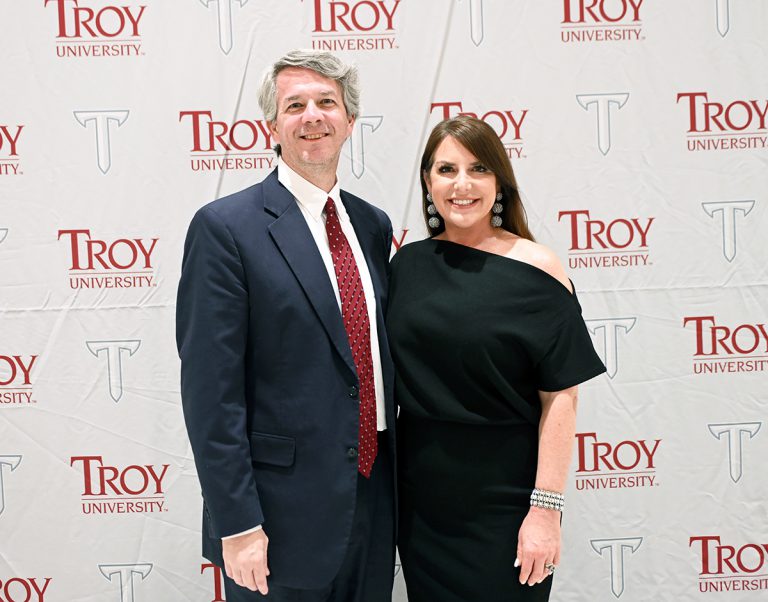 Stephanie Hicks East, right, and her husband Chris East, left, have been married for seven years and reside in Troy with their Shih Tzu, Murphy. (Submitted photo)

Stefanie Hicks East has been so impacted by her time in Troy University’s Hall School of Journalism and Communication, both as a two-time student and a current lecturer, she’s dedicated a legacy gift to help ensure its continued success for future students.

Unlike most children her age, East grew up with an affinity for watching the news and reading the newspaper.

“I was always the little kid who watched the news,” she said. “I kid you not, I would come home from school and I would lay the newspaper out on the floor because my arms were too little to hold it.”

As East got older, her love for the journalism field grew. The desire to pursue a career as a journalist, eventually led her to Troy University.

“I knew TROY had a great journalism program, so this is where I wanted to go to school,” she said. “It was close to home, and I got to work at TSU-TV, at the time. It was perfect.”

East worked in the media industry for nearly 20 years, anchoring and producing the morning newscast at WTVY in Dothan for three years right after graduating. She then spent 14 years in Montgomery as the evening news anchor at Alabama News Network where she was awarded “Best TV News Anchor” by the Alabama Associated Press and “Best News Series” by both the AAP and the Alabama Broadcaster’s Association.

During this time, she also earned her master’s degree in strategic communication from Troy.

“I was so excited about the strategic communication master’s program and that I could get my master’s degree while I was still working in the news business,” East said. “I’m really proud to have been able to graduate twice from Troy.”

When her time on television ended, she served as Director of Communications for the State of Alabama’s Office of Information Technology before returning to her alma mater in the fall of 2019. Originally seeking to teach as an adjunct lecturer, East jumped at the opportunity to apply for a full-time position.

“After my TV career was over, I thought it would be great to teach some adjunct classes and take my experience from the newsroom and share that with students,” she said. “When I found out I got this job I was shocked and so incredibly happy, and I’ve loved every day since. I love these students, I love the school, the department… I sometimes joke that I can’t believe I get paid to do this.”

East always knew she wanted to do something to give back to the University that had given her so much, but it wasn’t until a conversation with the Office of Development that she decided on leaving a legacy gift. The gift designates funds to be used for either new equipment and technology for the broadcast journalism department or to create a scholarship for a broadcast student.

“I wouldn’t be who I am today without Troy, and I wanted to be able to benefit this department that has done so much for me,” she said. “I hope this will help future journalists the way this school has helped me. I hope that many years from now, students are still getting the real-world experience they get here now, and I hope they’re taking those skills they learn in the Hall School of Journalism and Communication and making an impact in the world. I hope that many years from now, this gift can continue the legacy the Hall School has.”