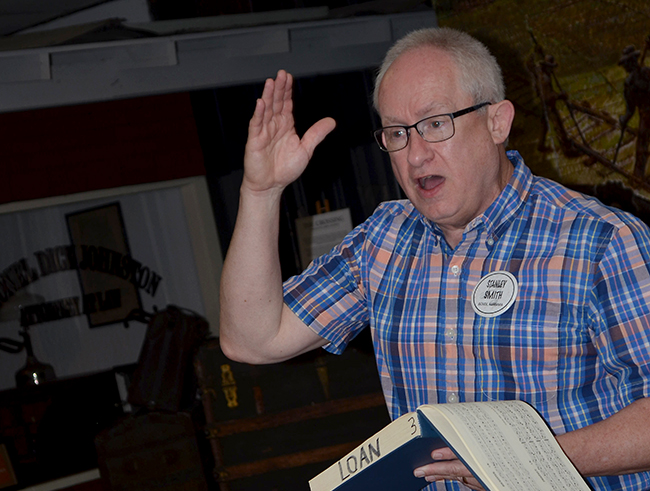 Each spring, the he Pioneer Museum of Alabama is host to the Sacred Harp Singing. And each spring, Stanley Smith of Ozark is among those who lead and sing the shape notes that are Sacred Harp.

Barbara Tatom, museum director, said congratulations were due Smith this year as he was awarded the Alabama State Council on the Arts 2022 Alabama Folk Heritage Award.

The award was established to recognize master folk arts who have made outstanding contributions to their artistic tradition.

Smith grew up attending shape note singings in the Wiregrass and was captivated by traditional fasola singing.

Smith has promoted and championed the Sacred Harp art form locally and supported the growth of the tradition into a global community.

He has helped bring Sacred Harp singing to the forefront in Pike County along with the late Ken Sundberg of Troy, Tatom said.

In the award presentation, ASCA recognized Smith’s dedication to the preservation and continuation of the tradition, citing that he has organized singings and singings schools. Singing schools, he led in 1990 and 1995, were part of the Alabama State Council on the Arts Folk Arts Apprenticeship program.

The Midwest Sacred Harp Singers that were taught in Chicago are honored in a dedication of a hymn composed by Smith. The piece titled “Chicago” is included in the 2006 revision of The Sacred Harp songbook.

ASCA recognized that Smith’s influence in the community of Sacred Harp singers is widespread. ASCA also noted that, as a singer, Smith exemplifies the pride and pleasure that Sacred Harp singers take in the music and the tradition. As a composer, he writes songs that add to the repertoire while adhering to the stylistic forms of Sacred Harp music. As a leader, Stanley Smith welcomes and helps first-time singers, who often become regular participants.

The Pioneer Museum of Alabama congratulated Stanley Smith as an Alabama Folk Heritage Award recipient and thanked him for the role he plays in the continuation of Sacred Harp music in the Pike County area.