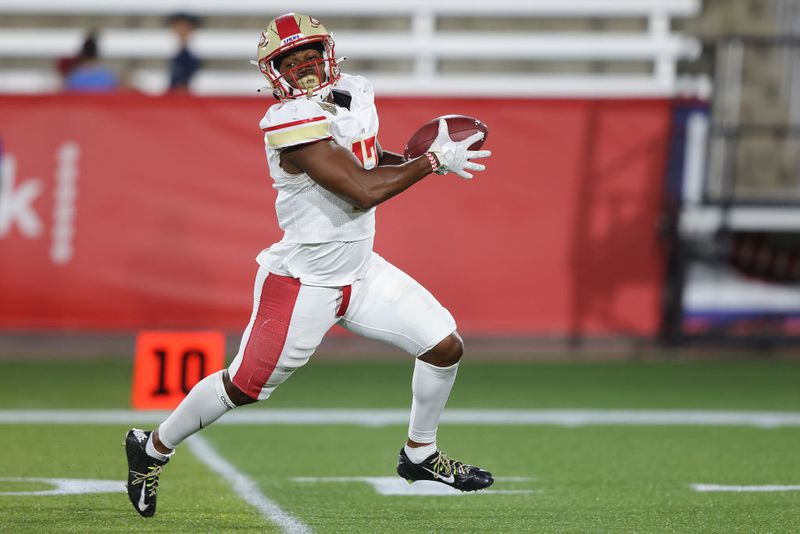 Marlon Williams of Mobile came up big for the Stallions this weekend. (Photo courtesy of the USFL)

It wasn’t pretty but the Birmingham Stallions (8-0) found a way to remain undefeated this past Saturday with a 10-9 win over the New Orleans Breakers (5-3) at Legion Field in Birmingham despite a rash of turnovers.

The Stallions turned the ball over a season-high three times but still managed to gut out a win, in large part due to the feisty Birmingham defense, which forced three turnovers of its own.

With the Stallions trailing 9-7 with just under two minutes remaining, Birmingham kicker Brandon Aubrey managed to squeak a 29-yard field goal just inside the upright to secure a 10-9 lead. A few plays later, the Stallion defense did what it’s done all season and secured the win, as New Orleans quarterback Kyle Sloter was intercepted by Birmingham defensive back Josh Shaw with just 15 seconds left to seal the win.

Things got off to a rocky start for the Stallions as Birmingham receiver Osirius Mitchell fumbled on the team’s first drive of the game. Birmingham still managed to take the first lead of the game, however, when J’Mar Smith found Adrian Hardy for a 27-yard touchdown pass with 2:17 left in the opening period to put the Stallions ahead 7-0.

New Orleans then took the lead on a 3-yard touchdown run to open the second half. The PAT was no good but the Breakers retained a 9-7 lead. Smith – who was hounded all day by the Breaker pass rush – was sacked on Birmingham’s next drive and fumbled, which the Breakers recovered. The Stallion defense responded once again, though, as Trey Baldwin intercepted a Sloter pass. Aubrey then missed a 45-yard field goal with 2:14 left in the third quarter.

Smith was intercepted to open up the fourth quarter but the Breakers missed a 45-yard field goal leading to the Stallions game-winning drive.

Both of Birmingham’s quarterbacks, Smith and Alex McGough, came away banged up following the win over the Breakers. Smith took a vicious hit in the second half injuring his hand. McGough also injured his ankle on a scramble in the second half. Birmingham coach Skip Holtz reiterated his plan to continue playing both quarterbacks, as long as they are healthy, moving forward.

“I’ve said all along I’m going to play two quarterbacks,” Holtz said after the game. “They both deserve to play. They’re both talented quarterbacks and they’ve both won in professional football.

“We’re very fortunate to have two. And if anything happens to a player, I don’t want to put a guy out there who hasn’t played in four weeks.”

Smith completed 15-of-29 pass attempts for 183 yards, one touchdown and one interception, while also rushing for 45 yards on seven carries. Former Alabama standout Bo Scarborugh rushed for 54 yards on 14 carries in his third straight start. With leading receiver Victor Bolden Jr. out with a knee injury, Mobile native Marlon Williams stepped up big for the Stallion offense, recording seven catches for 109 yards. Hardy also caught three passes for 43 yards and one touchdown.

Birmingham is back at it this Saturday for a 5 p.m. matchup against the Houston Gamblers in a game that will air live on the USA Network.