Blakeney once again on College Football Hall of Fame ballot 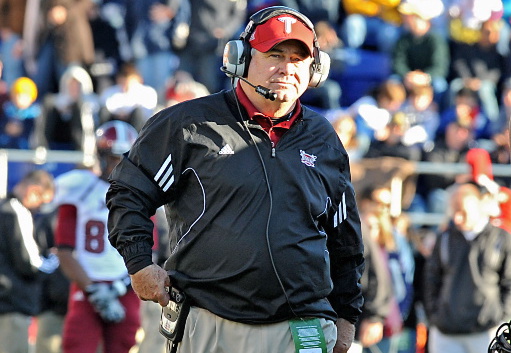 On June 6, the National Football Foundation (NFF) and College Hall of Fame announced the candidates on the 2023 ballot for induction into the College Football Hall of Fame and former Troy head coach Larry Blakeney is among the 89 players and coaches from the FBS on the ballot.

To be eligible for induction into the Hall of Fame, a coach must have been a head coach for at least 10 seasons with at least a .600 winning percentage of 100 games minimum and players much have received first-team All-American honors by a selector recognized by the NCAA.

This is the fourth consecutive year that Blakeney has appeared on the ballot. Blakeney coached Troy State/Troy from 1991 until 2014 and is the all-time winningest coach in Sun Belt Conference and Troy history. During his stint with the Trojans, he led his teams to eight conference championships, seven FCS playoff appearances, four bowl games and he won conference Coach of the Year on four separate occasions. During his tenure, his Troy teams went a combined 178-113-1. No other Troy coach in history has more than 40 wins.

Most notably, Blakeney guided Troy in the jump from NCAA Division II to NCAA Division I-AA (FCS) and then eventually to Division I-A (FBS), as well. His 2004 Trojan squad made the first FBS bowl appearance in school history and his 2006 team won the first bowl game in Troy history, as well. Meanwhile, his 1993 Trojan team – Troy’s first year in the FCS – made it all the way to the NCAA Semifinals. His 1996 team also made the Final Four and his Trojan teams made it to the NCAA Playoffs seven of the nine years Troy was in the FCS. His FCS Troy teams had six Top 10 finishes and three Top 5 finishes, too.

Blakeney grew up in Gordo and was a three-sport athlete at Gordo High School before going on to play college football at Auburn. He was also the first sophomore quarterback to ever start a game at Auburn under legendary coach Ralph “Shug” Jordan. Blakeney threw five touchdown passes in eight starts in 1966 before moving to safety in 1968. Blakeney was also a member of the Auburn baseball team.

Following his graduation from Auburn, Blakeney became the head football coach at Southern Academy in Greensboro for two years, including an appearance in the AISA State Championship in 1971. In 1972, Blakeney took the head coaching position at Walker High School for three years before taking over at Vestavia Hills in 1975. After two more years at the high school level, Blakeney returned to his college alma mater as Auburn’s new offensive line coach in 1977.

Blakeney spent the next 13 seasons as an assistant coach at Auburn under Jordan and Pat Dye. During his time at Auburn, Blakeney coached the offensive line, tight ends and wide receivers before becoming offensive coordinator. Following his successful run as an assistant at Auburn, Blakeney was hired at Troy State University in 1991 to replace Robert Maddox as the new Trojan head coach. Troy was coming off its first losing season in nearly a decade.

Former Troy defensive lineman Al Lucas and defensive back Frank Thomas are also on the ballot as players. Lucas was a two-time All-American at Troy and the 1999 Buck Buchanan Award winner, wrapping up his Trojan career with 129 tackles and 20 tackles-for-loss. He went on to play in both the NFL and Arena Football League. Lucas passed away tragically due to an injury suffered in an AFL game. The AFL renamed its Hero Award the Al Lucas Award in honor of Lucas.

Thomas is one of the most storied players in Troy history as a two-time All-American and a member of two National Championship teams as a Trojan. Thomas ranks 12th all-time in Troy history in interceptions and 18th in total tackles. He’s also a member of Troy University Sports Hall of Fame.

A number of players with Alabama connections are also on this year’s ballot including former Auburn standout Gregg Carr and former Alabama stars Antonio Langham and Chris Samuels. All three of those players went on to have successful careers in the NFL, as well.