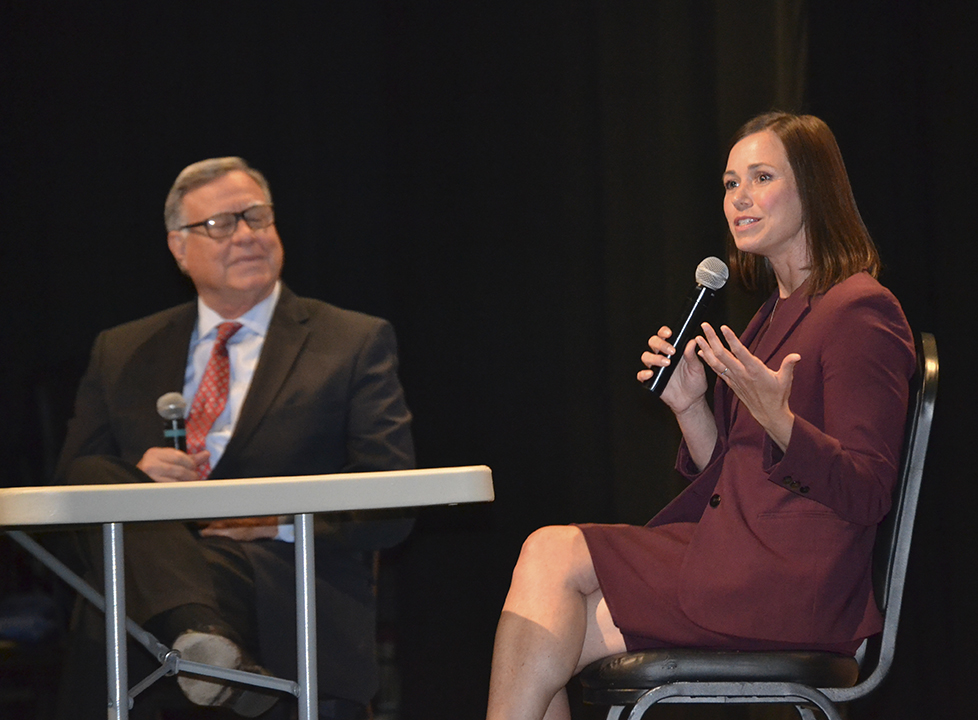 On Thursday night, Katie (Boyd) Britt, Republican candidate for the U.S. Senate, spoke at the 85th American Legion Alabama Boys State Forum at the Crosby Theater on the campus of Troy University.

Alabama Boys State is an annual program in which high school boys learn about the American government and participate in a model state government during the program. Annually, Alabama Boys State invites politicians running for office to come and speak to the boys in attendance and take part in a town hall or debate-like forum.

This year, both Britt and her Republican Primary opponent Mo Brooks – currently a congressman in Alabama’s 5th district – were asked to take part in the forum. Brooks did not attend but Britt came and spoke to those in attendance. Longtime political columnist and former Alabama State Rep. Steve Flowers introduced Britt and moderated the forum, as well. 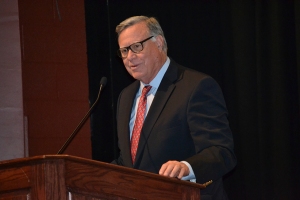 Britt is an Enterprise native that nearly pulled an upset in the Republican Primary of the U.S. Senate race – to replace former Senator Richard Shelby – in May earning 45.24 percent of the vote, just shy of the majority needed to avoid a runoff with second place Mo Brooks, who finished with 28.61 percent of the vote.

Britt herself took part in Alabama Girls State when she was a high school senior at Enterprise High School. Britt relayed a message to the Boys Staters that her grandfather gave to her just before she attended the program.

“When I sat in your seat 23 years ago I never imagined that this was possible,” she insisted. “He told me it doesn’t matter where you went to high school, what your name is, how much money your family has. He said, ‘What matters in life is your character, your integrity, your work ethic and the way you treat people. I have good news for you, Katie, you and only you control all four of those things.’

“As I came to Girls State and was intimidated by it all I kept reminding myself of that. So, that’s what I want to remind you all.”

Britt said that when she came to Girls State she heard others tell her that the experience and the relationships she would gain there would change her life, just as she was telling the boys at Alabama Boys State.

“This is something that can change your life,” she continued. “When I first came and someone told me that I thought, ‘Yeah sure.’ I just figured I would meet some people that could be my roommates in college or friends

“When I signed on the dotted line to incorporate our committee to run for the United States Senate, it was a ‘Girls Stater’ that signed right by name with me.”

Britt is a graduate of the University of Alabama and started her political career as an intern in Shelby’s administration. She went on to work for Shelby as his press secretary from 2004 until 2007. In 2016, Britt was named Shelby’s Chief of Staff in a position she served until 2018 when she was selected as president and CEO of the Business Council of Alabama. In 2021, Britt resigned from her role at the Business Council of Alabama and her career as a lawyer to pursue a run at Shelby’s job once he announced his retirement. Britt spoke of her work, coming from underdog in the race to now the favorite to win the runoff later in June.

“When we first started in this race my opponent (Brooks) was polling at 65 percent and me at 2 percent,” Britt recalled. “You could have put anyone on the ballot across the whole state and they would have polled higher than 2 percent. What we thought was possible, people said there was no way. They said, ‘There is no way you can compete,’ but we went out and we worked.

“I believe the people of Alabama are worth working for and fighting for. We went to every single county across this great state and sat down with people and listened and learned.” 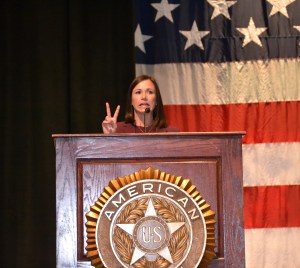 Britt spoke about her campaign along with her own experience with Alabama Girls State. (Photo by Josh Boutwell)

Britt – who is married to former Alabama All-American football player and NFL player Wesley Britt – is 40 years old, one of the youngest candidates running for any office in Alabama and if elected she will be the first female in Alabama history to ever be elected to the U.S. Senate, as well. She emphasized to the students at Alabama Boys State the importance of young people stepping up to lead.