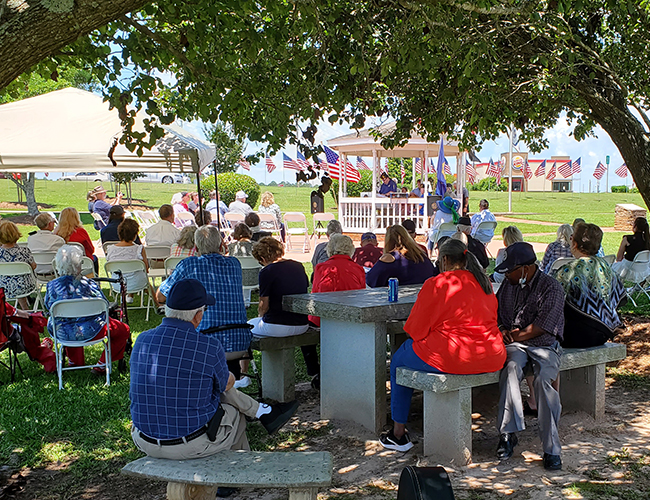 Huck Treadwell | The Messenger The names of the deceased veterans from Pike County were read aloud at the American Legion Post 70 Memorial Day service.

Prior to the service, the American Legion Post 70 Auxiliary added the names of three veterans to the Wall of Honor at Bicentennial Park. The names added to the wall were Col. William L. Jackson, U.S. Army Air Corps, Pvt. Frazier Norton, U.S. Army, both from World War II, and Louie Glenn Davenport, U.S. Army, Vietnam.

The guest speaker for the ceremony was 12th Circuit Judge Henry “Sonny” Reagan. Reagan served as a pilot in the U.S. Army and talked about what Memorial Day meant to him.

Reagan said, like many people, Memorial Day meant gathering with friends and family, maybe a trip to the beach and a three-day holiday. “All that changed for me on May 14, 2006,” he said.

Reagan said when he joined the Army, one of the first people he met was fellow Army aviator Matthew Wade “Bubba” Worrell.

A few hours later, Worrell was woken up and volunteered to fly another mission to support troops engaged in heavy combat. His AH-6M Little Bird helicopter was hit by an RPG and Worrell was killed in the crash.

After Reagan’s speech, flags were planted in honor of Jackson, Norton and Davenport. Then, the Roll Call of Honor was read for the veterans on the Wall of Honor.