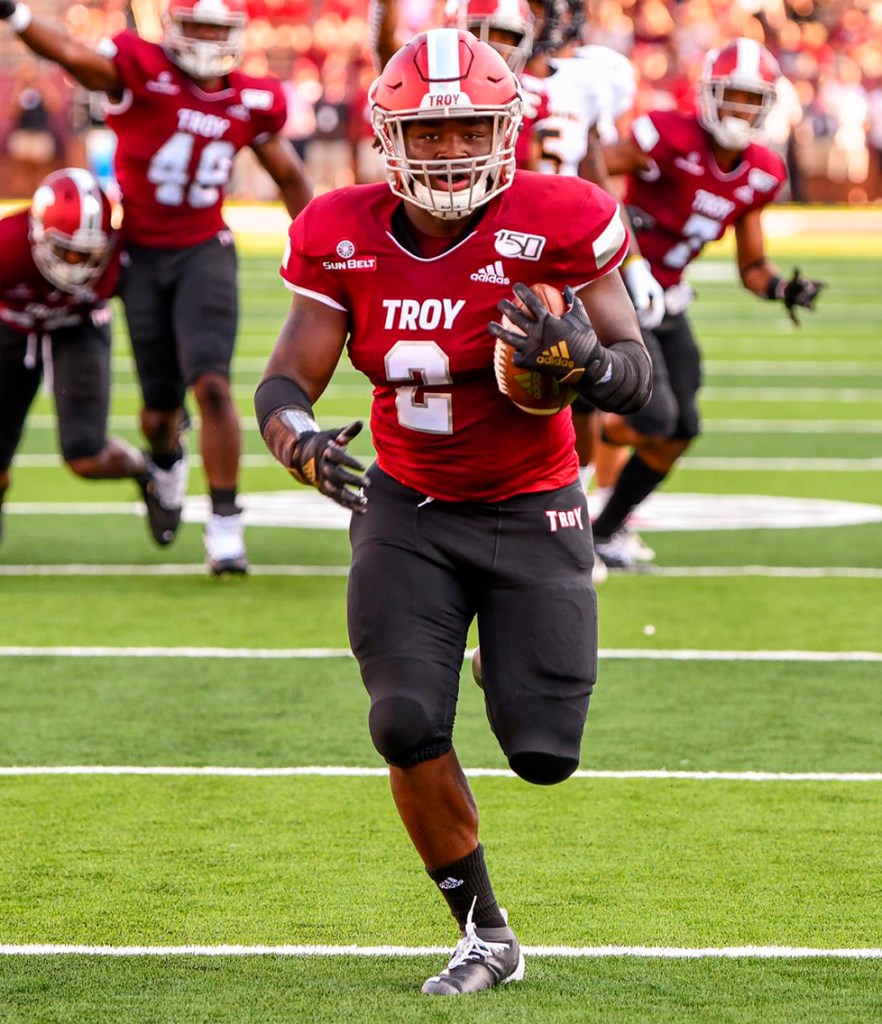 Carlton Martial (2) is one of the top linebackers in the country and recently inked an NIL deal with Jones Medical Supply. (Photo courtesy of Troy University Athletics)

Jones Medical Supply President Jason Jones is a staunch supporter of Trojan athletics and Jones Medical Supply – which has locations in Troy and Greenville – is already a partner with Troy University as the athletic department’s official oxygen supplier. Jones also wanted to support the athletes.

“We’re all about partnering with Troy Athletics in any way we can, that’s first and foremost,” Jones said. “No. 2, if we can help a student-athlete legally we want to be involved with that.

NIL was passed in 2021 by the NCAA to allow athletes to sign sponsorship deals and make money off their name, image and likeness as college athletes. Athletes all over the country have become spokespeople for brands, sold their likeness for merchandise and many other marketing opportunities. According to HME News – a national health and medical equipment publication – Jones Medical Supply is one of the first durable medical equipment (DME) companies to ink an NIL deal with athletes.

Renfroe is a Troy local, having played his high school career at Pike Liberal Arts as one of the top kickers in the AISA. Martial, meanwhile, is one of the top inside linebackers in the entire country, an All-American and is on the verge of breaking a number of Troy, Sun Belt and NCAA records going into his senior season. Those successes, however, are only a part of the reason Renfroe and Martial were selected by Jones to be the first NIL deals he inked.

“Renfroe is an obvious one, we’re a local company with local people, and we’ve known him all his life,” Jones said. “I’ve talked to a few staff members with various teams (at Troy) about the character of athletes and my No. 1 thing is that (the athletes) have to be good people first.

“I can’t have my brand attached to guys who aren’t doing things off the field or court the right way. Carlton Martial is the epitome of the kind of student-athlete you want your name associated with. He’s a great guy and it doesn’t hurt that he is one heck of a football player. He’s a great guy and I look forward to meeting more great guys and doing more NIL deals, but they have to be good humans first.”

The NIL partnership is for social media marketing from the athletes.

“The issue you have with TV or radio or anything like that is the cost,” Jones said. “You have to pay the student-athlete and then pay for the ad and TV time itself. With social media, there are zero other costs and you get just as many views or shares. It gets our platform out there and I think it could lead to other deals with other businesses for these athletes. It’s a great deal all-around for everyone.”

While Jones started with NIL deals with football players he plans to expand to the basketball court soon, as well.

“We do plan to do that and we will,” Jones said of signing more NIL partnerships. “I don’t have any in the works as of this moment but we will have some basketball players, both men and women, as well.”