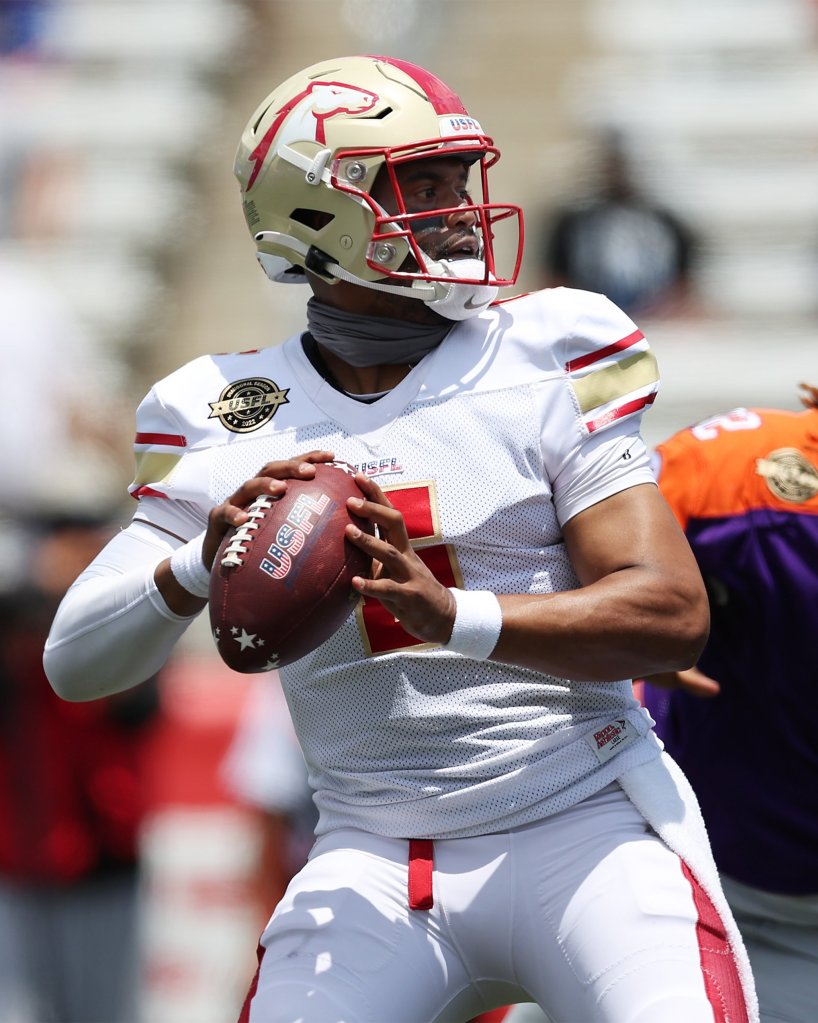 J’Mar Smith (6) and the Stallions have clinched a playoff spot. (Photo courtesy of the Birmingham Stallions/USFL)

The Birmingham Stallions (7-0) have still not been defeated in the revival of the United States Football League as they galloped to a 26-16 win over the Pittsburgh Maulers on Sunday to secure a spot in the playoffs.

Despite an early deficit, the Stallions once again rallied to dominate the second half. Birmingham took the first lead of the game on a 27-yard field goal from Brandon Aubrey in the first quarter but Pittsburgh answered with a 4-yard touchdown run by the USFL’s leading rusher Madre London with 3:10 left in the opening period to give the Maulers a 7-3 lead.

After a Pittsburgh punt return and Birmingham penalty gave the Maulers the ball in the Stallion red-zone, Birmingham’s defense once again made a big play. Willie Henry sacked Pittsburgh quarterback Vad Lee, forcing a fumble, and Doug Costin recovered it to snuff out a Pittsburgh attempt to extend the lead.

Pittsburgh still managed to extend its lead to 10-3 on a 43-yard field goal on its next possession, with 8:25 left in the first half. Aubrey booted a 36-yard field goal to cut the Mauler lead to 10-6 with 2:08 left and the two teams would go into halftime with that score remaining.

Birmingham seemed poised to extend the lead midway through the third quarter, but J’Mar Smith’s pass to fellow quarterback Alex McGough went through McGough’s hands and into the waiting arms of Pittsburgh’s Bryce Torneden. Birmingham used McGouh at receiver a number of times in an attempt to get both Smith and McGough on the field at the same time.

With the game still within reach, Pittsburgh coach Kirby Wilson made the head-scratching decision to replace Lee at quarterback with newcomer Roland Rivers, who was signed by the Maulers less than a week prior, with just 3:17 remaining. Rivers was unable to convert a fourth down and Aubrey drilled a 45-yard field goal with two minutes remaining to seal the 26-16 Birmingham win.

Former Alabama running back Bo Scarbrough once again came up big for the Stallions, in just his second career start, rushing for 100 yards on 27 carries, while Smith completed 9-of-24 pass attempts for 138 yards and an interception. Victor Bolden Jr. caught one pass for 53 yards. Birmingham piled up 200 yards rushing as a team, as well.

Following the game, Birmingham coach Skip Holtz read off the official playoff invitation the Stallions received as a result along with his own message to the team.

“We will see you in Canton (Ohio) on June 25,” Holtz read out loud. “I’m proud of you, proud of the way you play together. We make mistakes, but we keep banging that rock. Keep lifting each other up and keep finding a way. I’m proud of you and I’m proud of our efforts.”

So far only the Stallions and New Jersey Generals have secured playoff spots thus far, with still three games remaining in the regular season. Birmingham will play the New Orleans Breakers, who sit at No. 2 behind the Stallions in the East Division, at 2 p.m. on Saturday in a game that will air live on FOX.