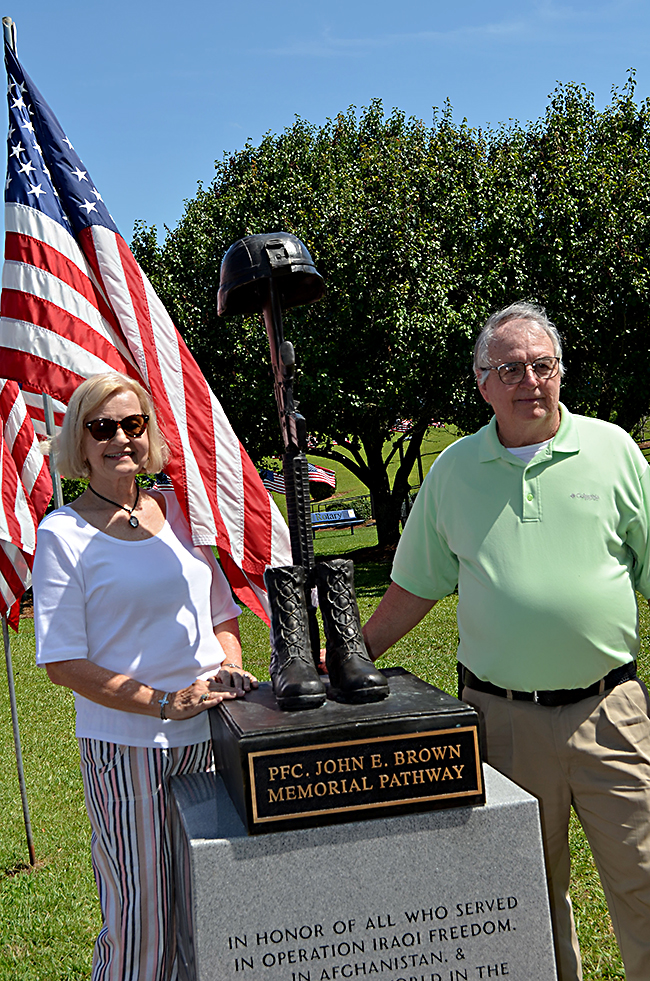 Jaine Treadwell | The Messenger Ed and Bonnie Brown with the memorial dedicated in their son’s honor. PFC John E. Brown was a member of the 101st Airborne who died in Operation Iraqi Freedom.

On the Sunday afternoon before Memorial Day 2022, the City of Troy dedicated the PFC John E. Brown Memorial Pathway at Bicentennial Park in memory of PFC, John E. Brown, Army 2-44 ADA 101st Airborne Division and in honor of all who served in Operation Iraqi Freedom, in Afghanistan and around the world in the War on Terror after 9/11/01.

Troy Mayor Jason. A. Reeves said the PFC John E. Brown Memorial Pathway will be a sacred place for those who come to remember and honor those who made the ultimate sacrifice and also those who dedicate their lives in service to others.

Reeves said the walkway is a place to come to honor those who serve in the military and in other ways, including law enforcement officers who are dedicated to serving and protecting local communities.

McCants said he watched Brown as he carried out his duties to the letter.

Ed and Bonnie Brown expressed appreciation to Mayor Reeves and the City of Troy for remembering and honoring their son and all of those who serve.

“Johnny was proud to be a soldier and we are proud of him as a son and soldier,” Bonnie Brown said. “We appreciate all those who serve and we honor them, too. The parkway means a lot to our family and, I’m sure, to all those it honors.”