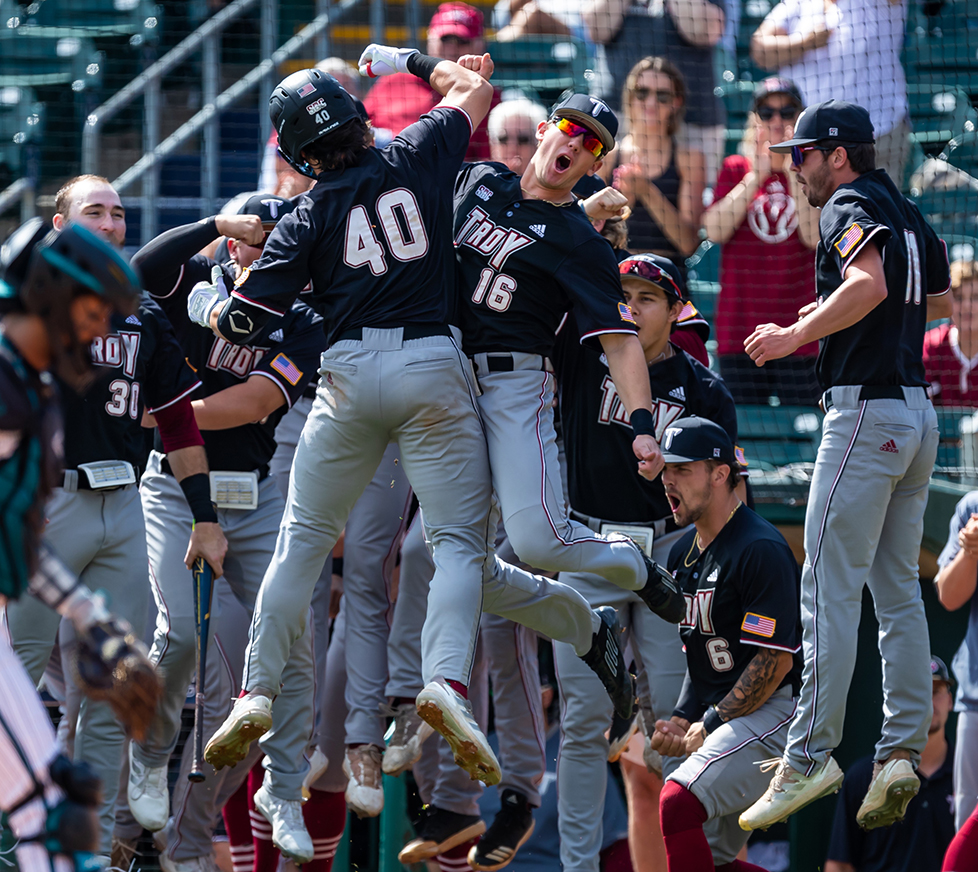 The Troy Trojans knocked off No. 3 seed Coastal Carolina Chanticleer by a score of 6-4 in the Sun Belt Conference Baseball Tournament Quarterfinals on Friday in Montgomery.

In the bottom of the first inning, Coastal’s Tyler Johnson gave the Chanticleers a 2-0 lead with a two-run home run. Troy answered right back when Clay Stearns drilled a two-run homer of his own in the top of the second inning to tie the score 2-2.

The two sides slugged it out in a scoreless next four innings before Troy took its first lead of the game when Brandon Schrepf hit an RBI single into left field that drove Easton Kirk home. Jesse Hall then hit an RBI single of his own to drive Trey Leonard home and put Troy up 4-2.

Senior Troy pitcher Rigsby Mosley pitched the first seven innings and left the game in the eighth inning to a round of hugs from his teammates. Grayson Stewart took the mound for the remainder of play.

With the bases loaded in the eighth, Coastal’s Nick Lucky hit a double into right field to drive home both Austin White and Eric Brown to tie the score 4-4. With the go-ahead run on third base, Stewart mowed down the next batter to get the Trojans out of the inning.

In the top of the ninth, Hall hit an RBI single right up the middle and Brady Moore managed to beat the throw at home plate and give the Trojans a 5-4 lead. In the very next at bat, Kyle Mock hit an RBI single to drive Schrepf home and extend Troy’s lead to 6-4.

Troy needed just three batters to get the three outs needed to secure the win and advance to the semifinals.

Hall went 3-for-5 at the plate against Coastal with two RBIs. Mosley pitched seven and 1/3 innings with seven strikeouts along with giving up five this and four earned runs.

Troy’s win in the quarterfinals came despite being swept by Coastal just two weeks prior at home and advances the Trojans to the Sun Belt Semifinals for the first time since 2019. The Trojans will now play in the conference semifinals on Saturday at 3 p.m. against the winner of Appalachian State and Georgia Southern.