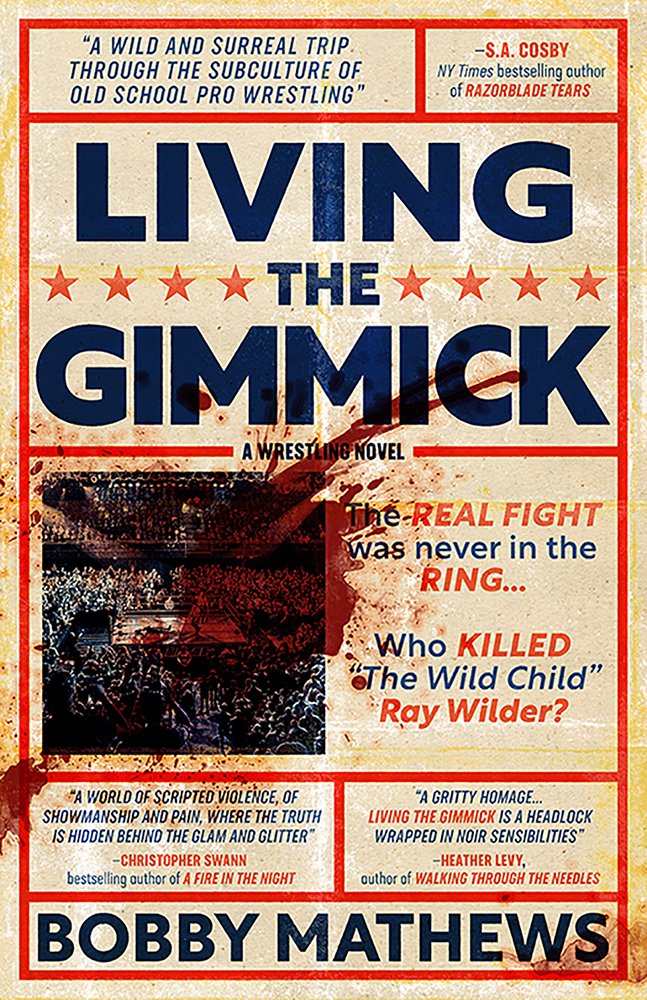 Mathews is a longtime reporter, managing editor and sports editor that has worked for the Enterprise Ledger, Troy Messenger, The Statesboro Herald in Georgia and numerous other media outlets. The Enterprise native is also a graduate of Troy University and is currently the sports editor of the Trussville Tribune.

“I always wanted to write novels and I’m really excited to have the opportunity to do this one,” Mathews said. “I’ve been writing nonfiction and news and sports in community newspapers for 15-20 years, so I always had in mind that I wanted to write a book and make that jump from news to fiction.

“It’s allowed me to scratch that itch and I sort of took advantage of that during the pandemic. During that time, I wrote and sold two books and wrote 25 short stories and sold them all. Over the last two years, I have had a productive time writing fiction.”

“Living the Gimmick” is about one of the most famous professional wrestlers in this fictional world, “The Wild Child” Ray Wilder, who is murdered. The book’s main character is a retired wrestler Alex Donovan, who is also Wilder’s best friend and is on a quest to discover his friend’s killer.

“I’ve been a wrestling fan all my life,” Mathews said. “I blame my dad. When we first moved to South Alabama we began watching Southeastern Championship Wrestling (SECW) out of Dothan and as I got older, some times that was the only thing my dad and I had in common.

“We would meet in the living room at 5:30 p.m. on Saturday afternoon and some times go to the matches in Dothan. I got to see a ton of people during that time like Hulk Hogan when he was in the area as Sterling Golden and Terry Boulder. I got to see Randy Savage and Lanny Poffo when they were in the area early in their careers. I got to see homegrown talent like Jerry Stubbs, Ron Fuller, Bob Armstrong and the earliest days of Arn Anderson. All of those guys that would go on to become a big deal in the pro wrestling industry.”

The 1980s “territory days” of professional wrestling saw dozens of successful regional wrestling promotions selling out arenas all over the country, long before the World Wrestling Federation (WWF) – later WWE – took the wrestling business national and then global. That was also a time of lawlessness and chaos in the wrestling business. Mathews spent hours researching his favorite era of the business, interviewing promoters and stars of the time.

“I always wanted to do something in the world of pro wrestling, because if you look historically in the territory days, it was such an outlaw period in the industry and there was just wild stuff that went on,” Mathews recalled. “One of the things I talked about with my publisher is that I had to kind of soften up some of the stuff portrayed going on in the 1980s because if you hear the real stories, you heard about what went on then, you’d go, ‘There is no way that happened,’ yet it’s real and it’s been documented.”

“Living the Gimmick” is set in Birmingham, where Mathews currently resides. The Alabama territory – known as SECW and later Continental Championship Wrestling – was one of the hotbeds of southern wrestling. Big events were held – and sold out – everywhere from the Cramton Bowl and Garrett Coliseum in Montgomery to the Boutwell Auditorium in Birmingham to the Houston County Farm Center and Rip Hewes Stadium in Dothan and everywhere in between.

“Birmingham was a hotbed of regional territory wrestling for a long time,” Mathews said. “I live in Birmingham now, so I’m fascinated by that time period. Some of the things early on in the book are set in the Houston County Farm Center (in Dothan). It’s set in auditoriums or buildings where I have been watching wrestling or I have some kind of connection to from where I live or work.”

While Mathews said that he didn’t base any of the characters explicitly on any wrestlers in particular, wrestling fans will certainly see some similarities.

“I can’t say that I based the book or any one or anything in the book on anyone or anything in particular, but I will say that people that read the book will find some similarities between Ric Flair and Ray Wilder,” he said. “There are certainly some similarities between the main character, Alex Donovan, and Arn Anderson. Neither character is based on those guys but I absolutely used parts of their public personas as background to form the characters.

“The book is fiction and not based on real people or anything like that but these characters are an amalgamation of things that you see publicly from different wrestlers but also the author’s imagination.”

Mathews’ book has already received acclaim from other authors.

“At times (it’s) a wild and surreal trip through the subculture of old school pro wrestling and at other times a deft love letter to the passion that drives us all, ‘Living the Gimmick’ is a rocking good time,” New York Times bestselling author SA Cosby said. “Bobby Mathews obviously loves three things: the South, pro wrestling and a good mystery.”