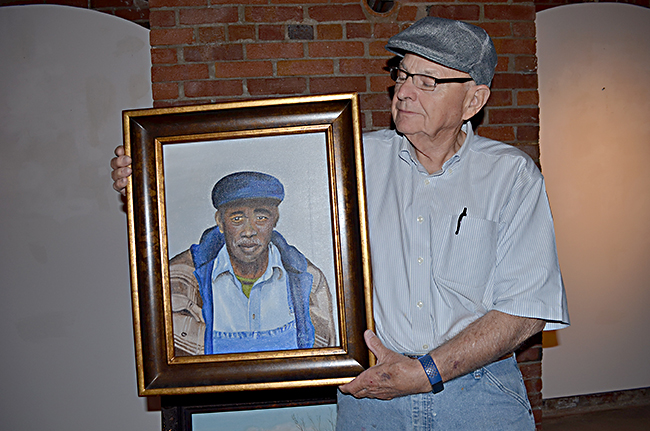 Jaine Treadwell | The Messenger Larry Stewart shows the first portrait he ever painted. A reception for Stewart will be held at the Johnson Center for the Arts Thursday at 6 p.m.

But, that’s a little too stuffy.

That’s the way downhome folks would size up his work

and, perhaps, Stewart himself.

“I want my art to make people smile,” he said. “I’m not in this business to make money. You can’t take money with you, but, when I’m gone, I hope my art will continue to bring smiles to faces.”

The Johnson Center for the Arts will host an artist’s reception for Union Springs artist Larry Stewart from 6 until 7:30 p.m. Thursday. The public is invited to come and smile a while.

“Larry is a lawyer and he told me he has never been called a bad name as an artist,” Campbell said. “I told him, I was sure he couldn’t say the same thing about his other profession.”

Campbell said Stewart is an outstanding artist, who also has an interest in airplanes and old cars.

“Larry is a man of many talents,” she said. “He his personable; he is easy to talk to and always interesting.  He is a Southern gentleman.”

Ask this gentleman about his artwork and he will probably respond with a thoughtful sigh.

“I paint whatever comes my way,” he said. “I might paint a Tom’s Toasted Peanuts sign or Pinksons Grocery, an old vehicle or a hound dog, a tree, a portrait of Vincent van Gogh or a free-range chicken.”

But, no matter what Stewart paints he will have a story to “go along with it.”

As for style, Stewart said his work is simple and spontaneous.

“Sometimes, I paint with disappearing edges,” he said. “I let the viewer decide on that. I enjoy painting almost anything and often things I never thought of before, a landscape that just needed to be painted.”

The old adage about not seeing the forest for the trees is not a hang-up for Larry Stewart, he has the uncanny ability to see the forest among the tree and, when he does, he captures the image on canvas in a mighty fine way.