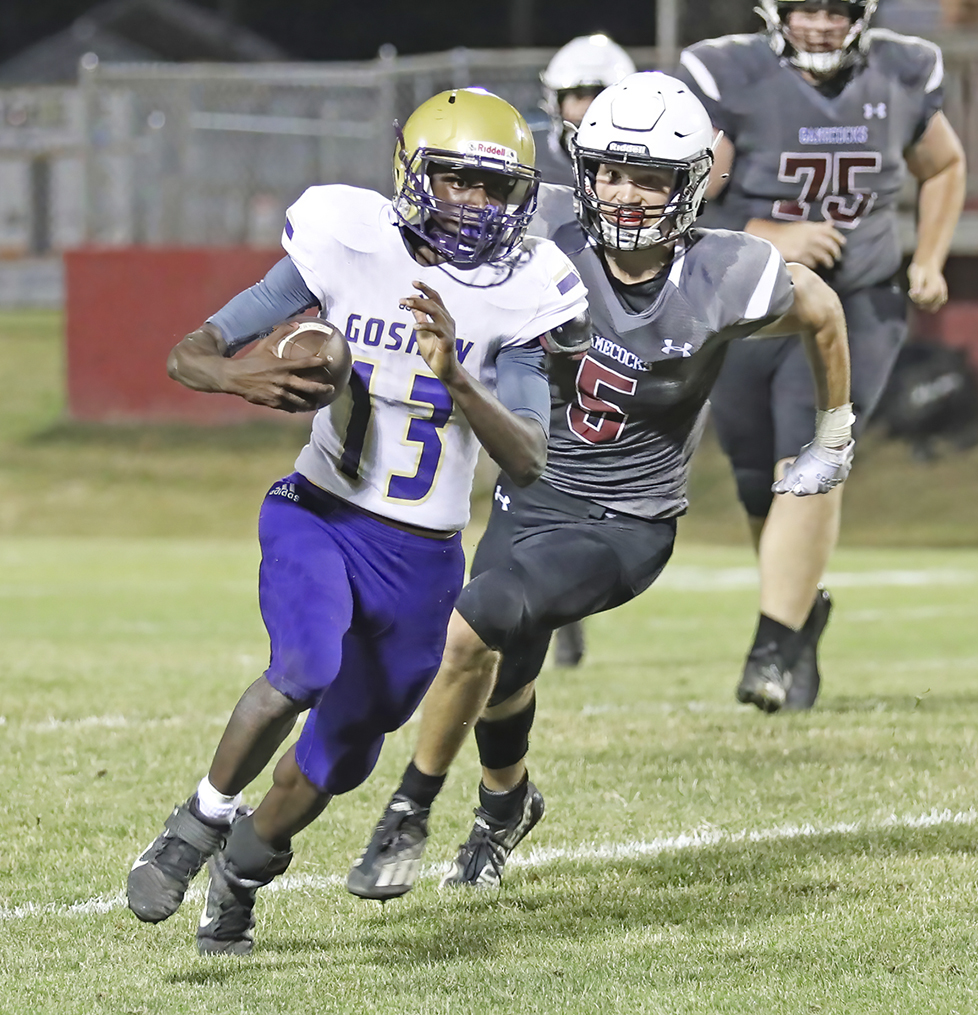 The Goshen Eagles closed out spring football practices with a resounding 59-26 win over the New Brockton Gamecocks on May 20.

Goshen opened up the game forcing a New Brockton fumble and then the Eagles scored on a 39-yard run from Sczmerick Andrews to go up 6-0 early. The PAT was no good. After forcing another Gamecock fumble, Goshen scored again on a 37-yard run from Andrews. After the PAT, Goshen led 13-0 with 9:18 left in the opening period.

After the Eagles forced a New Brockton punt, Goshen scored yet again, this time on a 70-yard touchdown run by Andrews. The PAT was no good but Goshen led 19-0 with 7:31 left in the first quarter. Goshen scored three touchdowns on its first three plays of the game.

New Brockton’s Karyus McNabb scored on a 41-yard run on the Gamecocks’ next possession to cut the lead to 19-8 following a 2-point conversion with 4:52 left in the first quarter. Goshen and New Brockton then traded punts but Goshen found pay dirt again when the Eagles scored on an 11-yard run from Andrews with 11:10 left in the first half. The Eagles failed to convert a two-point try but still led 25-8. Goshen scored yet again on a 74-yard touchdown pass from Peyton Stamey to Jamari McClure to go up 31-8 after a failed PAT. Goshen then scored yet another rushing touchdown.

Goshen scored three more touchdowns in the third quarter and New Brockton scored one more as the Eagles continued to dominate the remainder of varsity play. The JV squad for both teams played the fourth quarter.

“It felt good to get some positivity going after last year with the struggles we had,” Goshen coach Don Moore said. “We were young (last year) and coming in late as a coaching staff, we couldn’t really get anything going last year. Going into the spring I said I wanted to see our guys compete and they did that and what you saw in the game was the end result of that.”

Andrews finished the game with 275 yards and four touchdowns on just nine carries for Goshen. McClure rushed for 93 yards and three touchdowns along with his 74-yard touchdown catch, while Andrew Galloway also scored on a 40-yard run. KJ Bristow added 63 yards rushing as Goshen piled up 558 yards on the ground.

“It was great,” Moore said of his running game. “Our offensive line did a really great job up front. We missed a few assignments but that’s typical for the spring. The physicality and competitiveness was definitely there, though. You cut on the film and it’s the opposite of what we saw last year.”

Moore said that success Goshen had in the spring will springboard the Eagles into the summer and fall.

“I think it’s huge for us, especially for our young kids,” Moore said. “The motivation and all is there. They’re excited about what they did and excited about the summer and the fall. It was all a positive for us.”