The Trojans returned to the Class 5A Elite 8 this season for the first time since the 2003-2004 season and finished the year with an undefeated area record, 24-6 overall record and the Area 4 Championship. Additionally, three Trojan seniors have signed college scholarships, as well. Longtime Charles Henderson supporter Dan Smith served as the banquet’s MC for the night. 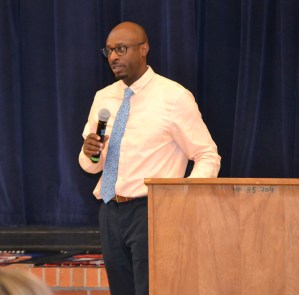 “This group of guys, 20 years from now, people will look at them as the team that set everything else up,” CHHS coach Tim Fayson said. “Everything that we do moving forward from this point, they set the foundation for it. I’m so proud of this group and just to be associated with them. There are no words that can express the love I have for these young men. I’m always going to be there for you when you need me.” 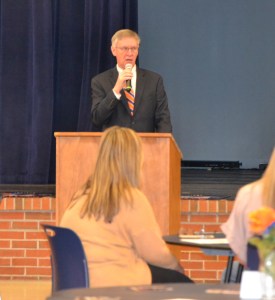 Longtime CHHS supporter – and graduate – Dan Smith served as MC for the banquet.

After Fayson gave out all of the individual awards to his team, he said that he struggled with the thought of giving a Team MVP Award.

“They wanted me to give out an MVP Award,” Fayson said of his team. “Me and my wife talked about this last night and I just don’t feel comfortable with it. I can’t just give it to one guy because everyone was so valuable to what we did.

“That’s why I love this team. Those other guys (players that didn’t start) came to practice every single day and gave everything they had to make us a better team. My love is just as great for those guys as anyone else on the team. So to me, the MVP Award goes to the entire team.”