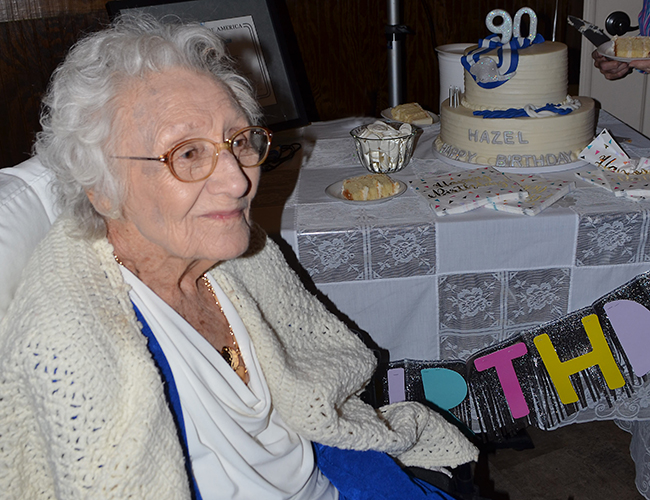 Except for a mishap that kept Hazel Spivey from working the crowd, her 90th birthday was “all I could have hoped for.”

Spivey, formerly of Pike County, celebrate her milestone birthday with a packed house of family members and friends in Ozark on Sunday.

“This is a day I’ll always remember,” Spivey said. “Everybody has been so good to me and everybody was so good to Charlie. I wish he could have lived to be with me today.”

Spivey’s son had cerebral palsy but she was devoted to making sure that his every need was met and that he had every opportunity available to him.

“Charlie was not a burden for Hazel to bear; his condition was a challenge to be overcome,” said Freddie Turner. “Hazel devoted her life to helping Charlie overcome that challenge.”

Many of those at Hazel’s 90th birthday party were involved in the Scouting program that was such an important part of the lives of mother and son. Both achieved the highest rankings in Scouting, Charlie, an Eagle Scout, and Hazel, a Silver Beaver Award recipient.

But Sunday was a celebration of Hazel Spivey’s 90 years and many of those in attendance spoke of her dedication to her children, Charlie and Glenda, to Scouting, to her workplace and to the communities where she lived.

For some, including Richard Parker, Hazel Spivey was like a second mother and one who was always available to help others in their times of need.

“Hazel is a special person who is willing to do whatever possible to help others, no matter the need,” he said.

Hazel was recognized as a compassionate person who had, at one time or another, “helped all of us in the room.”

Kirby said Hazel’s commitment extended to the workplace and cited her dedication to Hazel’s Café in Brundidge to Krystal and KFC (longtime) in Troy.

John McCall said he had never met Spivey but had talked with her many times as she made requests on WTBF. McCall then played a recording from Bobby Tomberlin, country music songwriter, wishing Hazel Spivey a wonderful 90th birthday.

Trojan Joyce Dix said Hazel Spivey is loved by those who know her.

“Hazel is gentle, she is tough; she is loved and she loves,’ Dix said. “This day meant so much to her. She has a scrapbook of memories and I’m sure this day will be front and center in her book. Hazel is a sweetheart. She deserves this day and this outpouring of love.”