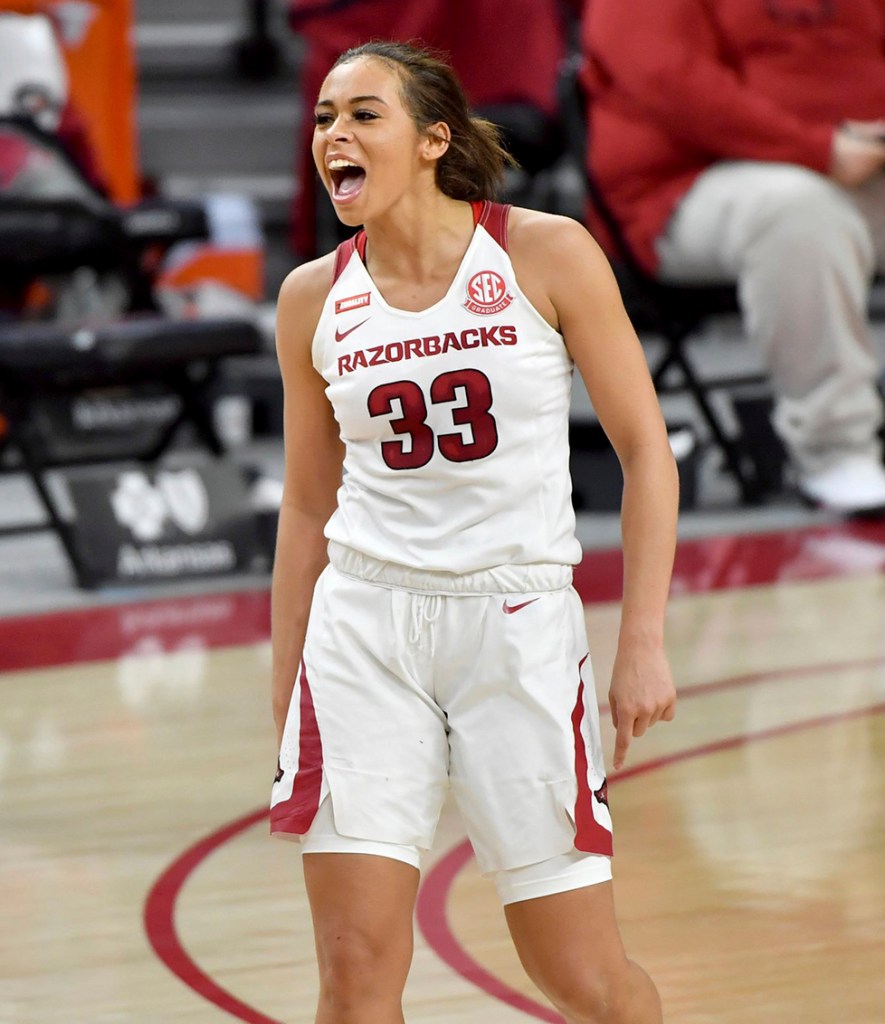 Arkansas guard Chelsea Dungee celebrates after hitting a shot against Connecticut during the second half of an NCAA college basketball game Thursday, Jan. 28, 2021, in Fayetteville, Ark. (AP Photo/Michael Woods)

The 25-year old Dungee comes to Troy following the end of her rookie season in the WNBA with the Dallas Wings. Dungee was the fifth overall pick in the 2021 WNBA Draft and played in 14 games with the Wings as a rookie. Dungee also played internationally Sydney Uni Flames of the Women’s National Basketball League in Australia in 2022. In three games with the Flames, she averaged five points per game.

Dungee will replace former Troy coach Neil Harrow, who departed to join the James Madison staff earlier in the spring.

“It’s been almost eight years since I’ve had an opening on my staff to fill,” Rigby said. “When this position came open, I knew I wanted to hire someone who would make a strong impact on current players and carry deep influence with recruits.

“Chelsea will be all of this and much more. She worked her way up into being a top scorer in the NCAA and a high draft pick in the WNBA. The passion she possesses, and her desire to be great, will be infectious. With her presence, Chelsea will help us continue to elevate the brand of Troy Women’s Basketball in the recruiting world. Hiring Chelsea puts a big ‘W’ in our win column already.”

The 5-foot-11-inch guard was Gatorade Player of the Year at Preston High School in Oklahoma before starting her collegiate career at Oklahoma University, where she averaged seven points per game as a freshman in 2016-2017. Following her freshman season, Dungee transferred to Arkansas and became one of the top players in the entire country.

In 2018-2019, Dungee averaged 21 points, four rebounds and two assists per game and 17 points and five rebounds as a junior in 2019-2020. As a senior, though, Dungee averaged a career-high 22 points, four rebounds, two assists and two steals per game on her way to being named first-team All-SEC, third-team AP All-American and WBCA All-American. Her 759 points in 2018-19 is the most in school history in a single season and her 22.3 points per game as a senior ranks second in school history. She also holds the school record for points in a career and most free throws in a career. Dungee said that her goal has always to become a college basketball coach.

“I am excited about the opportunity to pursue my lifelong goal of becoming a Division I women’s basketball coach,” Dungee said. “My collegiate and professional experiences have provided me with vast knowledge of the game and the ability to create and maintain healthy relationships through shared experiences. The feeling of giving back and contributing to the growth of young women is unmatched. I look forward to being a part of the Trojan family.”

Dungee joins fellow assistant coaches Jennifer Graf and Courtney Simmons as three former star college players. Graf was a star at Northwestern State during her college career and Simmons was a star at Louisville.