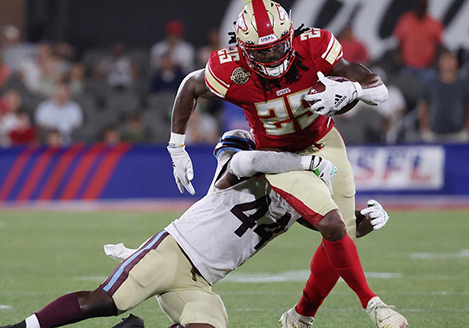 Former Alabama Crimson Tide star Bo Scarbrough exploded as the Birmingham Stallions (6-0) picked up yet another win on Saturday, knocking off the Michigan Panthers (0-6) by a score of 33-17.

Scarbrough – in just his second week with the team – earned his first start of the season and did not disappoint as he rushed for 105 yards and a touchdown on 16 carries.

Scarbrough’s first career USFL touchdown came late in the third quarter after Michigan cut Birmingham’s lead to 19-17. The Stallions turned to Scarbrough and the running game on the drive and the former Alabama standout capped it off with an exciting 28-yard touchdown run in which he dove into the end-zone for the final five yards of the run. The Stallions dominated the remainder of the game from there.

Michigan took an early lead on a 56-yard field goal in the first quarter but the Stallions tied things up 3-3 with 2:11 left in the opening period on a 22-yard field goal from Brandon Aubrey. Birmingham earned its first lead of the game when J’Mar Smith threw a 30-yard touchdown pass to Osirus Mitchell with 11:34 left in the first half to go up 10-3.

Birmingham’s Jonathan Newsome intercepted a batted Patterson pass with 10:00 left in the game and Alex McGough – who replaced Smith after his third quarter touchdown pass – scored on a 1-yard touchdown run with 3:46 remaining to extend Birmingham’s lead to 33-17.

Smith struggled at times in the first half but after throwing his second touchdown pass of the game to open the third quarter, Birmingham coach Skip Holtz made the confusing decision to replace Smith with McGough. Holtz insisted after the game his intention all along was to play both quarterbacks.

“I think we have two quarterbacks that are good enough to win,” Holtz said after the game. “And I think they’re both going to play a role.

“And I’m going to need both before it’s over and right now, at this point, I’ve got two quarterbacks that both have game experience and have won a football game. (That’s) a good thing.”

Defensively, the Stallions once again had to play without leader Scooby Wright III and JoJo Tillery led the way with 10 tackles, one tackle-for-loss and a sack. Brian Allen also recorded nine tackles.

Injuries continued to stack up for the Stallions, especially on defense, as linebacker Brody Buck left the Michigan game with a knee injury. Wright continues to deal with a calf injury and safety Nate Holley is also dealing with an injury. Additionally, the Birmingham offense lost Mobile receiver Marlon Williams to a knee injury in the win over Michigan.

The Stallions will look to remain unbeaten on May 29 in a 1 p.m. game with the Pittsburgh Maulers on FOX.