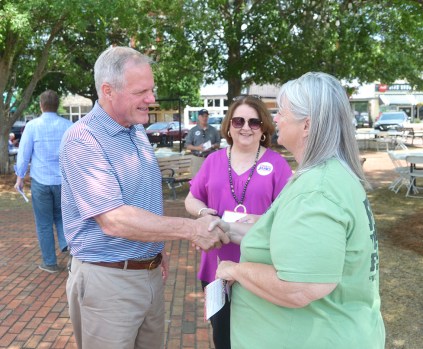 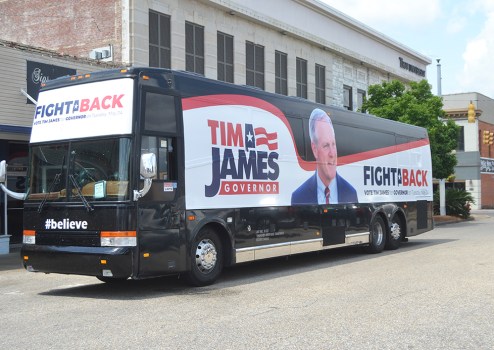 James is on a statewide “Fight Back Tour” across Alabama.

With the Republic primary race for Alabama Governor tightening in recent weeks, Gubernatorial candidate Tim James made a stop in Troy on his “Fight Back Tour” on Friday morning.

James’ stop in Troy was day three of a four-day bus tour across the entire state of Alabama that finishes off in Montgomery on Saturday.

“It really sort of was dormant and kind of low-key until about 10 days ago,” James said of the race. “It was like things sort of clicked with the public and now it’s piping hot and we’re excited.

“The race now is very much on people’s minds and what a governor’s race is, when challenging an incumbent, is really nothing but a referendum on the incumbent. You are deciding, ‘Do I want to keep this person or make a change?’ I think the people of Alabama are going to make a change.”

According to a recent poll from Emerson College and The Hill, Ivey is still leading the race but James is currently in second place with Lynda Blanchard in third place out of the nine candidates. The poll also shows Ivey currently with less than the majority needed to avoid a runoff, however.

“The question is, ‘Who do I want to lead the state in the years ahead?’ Our education system now is at the bottom of the barrel,” James said. “Vaccine mandates, forcing children to wear these masks is insane. All of these things that have happened have done tremendous untold damage to children across our state. So, there is a lot to talk about.”

James went on to point to mental health as an important issue in the state.

“Internally, mental health is in shambles (in the state),” James said. “We’re funding 100s of millions of dollars that (Ivey) is passing out for every little this and that. It’s nice but it’s not necessary.

“We have a fentanyl problem and mental health issues, you have all of these other things that really do matter and they choose to spend our taxpayer money on things that are nice but not necessary. These are the things that are on people’s minds.”

James, though, pointed to religion as his key issue in this race, which he said ties into gay marriage, prayer in school and abortion rights.

“The key, the overriding issue, is we’re going to return this nation to its Judeo-Christian foundation,” he said. “All of the rest of this is important but that is the key issue. Roe v. Wade is going down. That puts into place what really is going to happen, it’s much bigger than Roe.

“School prayer, which was outlawed unconstitutionally, will be reversed, as well. So will the Obergefell case – the gay marriage case – where the court usurped the constitution in 2016. All of these are state issues, we are going to put prayer back in our public schools and we’ve been on a half-century hiatus but we’re going to get back into proper alignment now.”

James said that he would lead the charge on these issues and more if elected.

James pointed to the gas tax that was instituted in 2021 as something that proves how far from reality our current legislatures have become.

“This gas tax, when they did it there is no way they could have foretold the future, but that was a 55 percent tax increase, which is unheard of on a percentage basis,” he emphatically said. “That goes to show how out of reality these people have been, that would be like taking our five percent state income tax and increasing it to 7.5 percent overnight. If they did that you would have a revolution and people would go crazy. They just haven’t felt the moment and don’t understand the pain that people are going through. People are in pain right now.”

The pain that James says the people of Alabama are going through has led to him calling on Ivey to immediately take three steps in easing it, as well.

“No. 1, she needs to pause the entirety of the state gas tax right now,” he emphasized. “It’s 30 cents right now and people are suffering, this is not a political line.

“They really are having to choose between gasoline and other essentials. That is real, that’s not ‘hocus pocus’ or political talk or political smack (talk) in a governor’s race. It is true. I have also called on her to immediately call a special session, call the legislature to session, and she should remove the sales tax on essential groceries, you can do it by statute. That’s long overdue and would immediately give back money to the taxpayers, the people that get up and go to work every morning. She should also take what’s left of the $1.5 billion surplus in this year’s budget and rebate it back to the taxpayers. It’s public money, it’s our money not government’s money and it needs to go back to the people. That would help our people get through this tough season we’re in right now.”

James insists he will lead Alabama on all of the key issues he is pointing to.

“I’m going to lead the charge on these issues,” he said. “Other states are going to watch Alabama and they’re going to say, ‘I want our state to be like Alabama. That’s the world in which I want my children and my children’s children to grow up in.’

“It’s really an exciting time. This race is very important. It’s a significant moment in time, its in a pointed time, for the nation, not just Alabama. It’s a shifting going on but Alabama is going to lead because Alabama has been at the forefront of these important issues over the decades.”