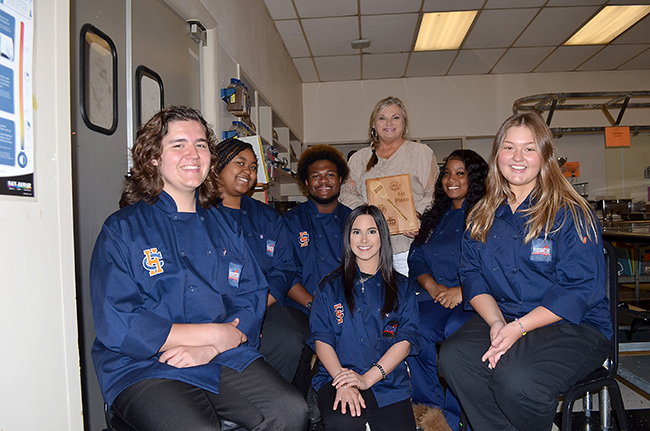 Chef Paula Schute said she was extremely pleased with the way the CHHS culinary arts team represented CHHS and how they competed as a team.

“As in any competition, to be successful, everyone has to work together to make the right things happen at the right time,” Shute said. “Our ‘chefs’ worked together as a team and each person did his or her part. There was no one person in this. It was everyone working together. I was proud of them. And, they were pleased with their efforts.”

Shute said the challenge was to prepare a lunchroom meal that was pleasing to the eye and also to the pallet.

“A lunchroom meal? That would not be easy,” she said.

Ideas for the menu came thoughtfully — chicken, or course, and a vegetable.

The cook team quickly agreed on zucchini that has “lots of possibilities.”

The chicken would be baked with a curry sauce. “We all liked that.” And the vegetable would need to “kind of” kick the pallet.”

The CHHS chefs had no immediate idea of what would be ‘eye candy” for the kids.

What could they plate that would catch kids’ eyes?

One chef suggested a lollypop. The idea just seemed to pop all at once.

A boning knife and a good imagination with a dash of oregano, onion powder garlic, salt and secret ingredients and the lollypop chicken

was a culinary arts’ creation.

The artistic challenge of Lollypop Chicken was to carve the meat so that it left the bone and bundled around the bottom to form a tempting lollipop for young kids.

The lollipop chicken was served with an eye-catching combination of zucchini and carrots with a homemade ranch dressing on the side.

The competing chefs agreed that the unique presentation of chicken and the colorful vegetable combination tipped the scales in their favor.

Schute said the students had a well-planned school lunch menu that was well-planned and well-prepared and attractively presented.

“We are looking forward to the Regional Junior Chef Competition,” Schute said. “It will be a great opportunity and a great experience. We will be ready to compete in the regional competition.