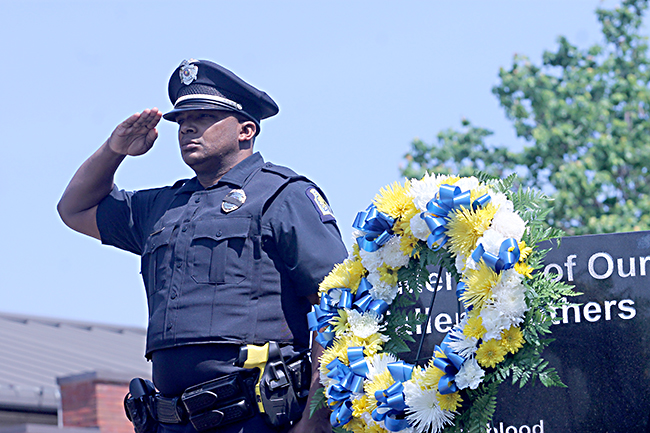 Huck Treadwell | The Messenger Troy Police Officer Elijah Rouse salutes during the playing of Taps. Rouse placed the wreath on the Troy Police Memorial during a ceremony to honor fallen officers.

This year’s ceremony marked the 44th time officers have observed this annual remembrance. National Police Week is held each year in May, with the TPD holding an annual ceremony to honor the officers that made the ultimate sacrifice in the line of duty.

“Today, It’s important to remember how long it’s been since we lost an officer,” Troy Mayor Jason Reeves said. “This year marked 40 years since Steve Watkins fell in the line of duty. Everybody that was a part of the Troy Police Department that day has never forgotten that sacrifice. That’s the importance of this ceremony. We have to make sure that our officers have everything they need to protect our community and themselves. We must be devoted to doing everything we can to make sure this never happens again. The longer ago it happened, the more we must remember.”

• Officer Will Jackson’s end of watch was June 3, 1905. Jackson was killed while attempting to arrest a man who had failed to pay his street taxes.

• Officer Jean Youngblood’s end of watch was May 21, 1962. Youngblood was shot and killed while attempting to secure a business from a man who had just robbed a bank and killed two bank tellers in Ozark.

• Sgt. Cecil Sullivan’s end of watch was Nov. 12, 1967. Sullivan died from an apparent heart attack while transporting an emergency patient from Troy to Baptist Hospital in Montgomery.

• Sgt. Billy Ray Dease’s end of watch was Jan.15, 1968. Dease died from injuries he sustained when he was struck by a car while he was directing traffic.

• Officer George Steve Watkins end of watch was Nov. 26, 1981. Watkins was shot and killed after responding to a report of an elderly man shooting a gun.

• State Trooper Robert “Bob” Jones’ end of watch was Oct. 3, 1991. Jones was killed when his patrol car crashed into a tractor trailer that pulled out in front of him while Jones was responding to a reckless driving call.