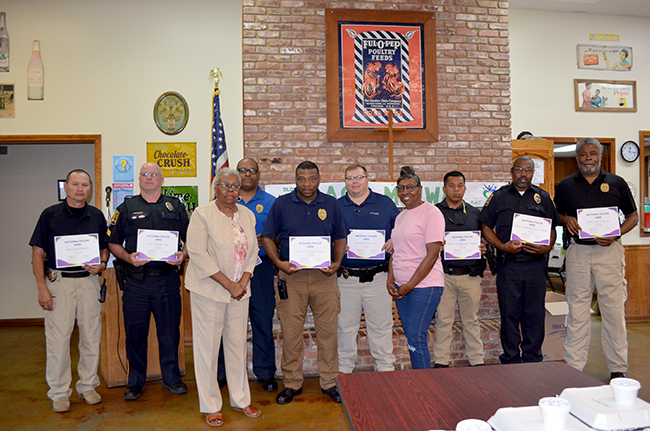 As an event of National Police Week, the Brundidge City Council honored the city’s police force with a luncheon at Brundidge Station on Thursday.

On behalf of the citizens of Brundidge, Mayor Isabell Boyd expressed appreciation to the police officers who “are courageous in their desire and efforts to protect and serve.”

“We are small in number but big on the streets,” Boyd said, of the Brundidge police officers. “Our officers are dedicated to the safety of all our citizens. We all owe them our respect and our appreciation.”

Boyd also thanked Municipal Judge Don Dickert and his staff for the role they play in keeping Brundidge safe.

Dickert, laughingly, said he is thankful for “court last night,” an indication that the Brundidge Police Department is out doing its job.

Dickert thanked the court staff for its dedicated service and the officers who are committed to the safety of the City of Brundidge.

Fay Terry, court clerk, said she has a perspective of the BPD officers that others don’t have an opportunity to appreciate.

“And they are the best,” she said. “They are a great bunch of guys and I love and appreciate them.”

“They are being more visible in the community and our citizens appreciate that, Rodgers said.

Chief Sam Green thanked the city council for the recognition luncheon for all those who are a part of the keeping Brundidge safe.

“We are here to do the job that has to be done to keep Brundidge safe,” Green said. “That’s the kind of job that our community expects us to do and the kind of job we are dedicated to doing.”