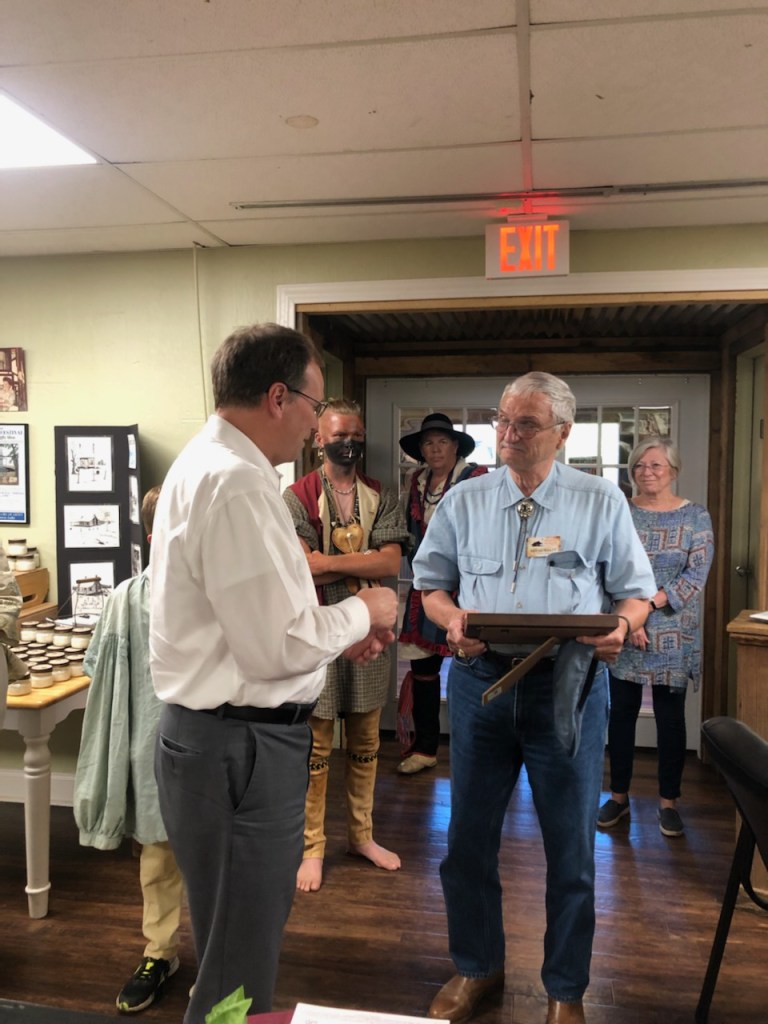 Art McKnatt, a longtime, dedicated supporter of the Pioneer Museum of Alabama, was recognized his continuing support of the museum Friday night at the museum. Jeff Kervin, left, museum board chair, presented a plaque of appreciation to McKnatt and thanked him for what he has done and continues to do in support of the museum. (Submitted photo)

Art McKnatt of Grady was recognized by the Pioneer Museum of Alabama for his dedicated and continuing service to the museum for nearly 30 years.

McKnatt was honored Friday night at a barbecue for the participants in the museum’s “Thunder on the Three Notch” event on Friday and Saturday.

Jeff Kervin, museum board chair, presented a plaque to McKnatt in recognition of and appreciation for his continuing service to the Pioneer Museum of Alabama as a member, docent, volunteer, restorer and as a contributor to the museum’s newsletter.

Kervin thanked McKnatt for his dedication to and promotion of the museum over the years.

“I’m not usually at a loss for words, but the recognition was such a surprise and so greatly appreciated,” McKnatt said. “I was almost at a total loss for words.”

McKnatt, laughingly, said he has been at the museum almost as long as it has been there.
“I came out here with my granddaddy on opening day in 1971,” McKnatt said. “My granddaddy was a friend of Mr. Curren Farmer, the founder of the museum. That was an exciting day for all Pike County.”

When McKnatt finished college at Troy, he moved to Montgomery, but when he moved back to the area, he quickly became actively involved in the pioneer museum.

“Back then, I was a general guide at the museum and I was also the blacksmith at events,” said McKnatt, who built the blacksmith’s rock forge. “I like to talk and the Adams country store is one of my favorite parts of the museum, so now I’ve just settled in, mainly, as a store guide.”

The old ice box brings back memories of the times when ice was crushed at country stores.

“Many times, large chunks of ice would hit the floor and children would scramble for them,” McKnatt said. “That was a real treat –a cold piece of ice on a hot summer day.”
McKnatt has restored the country store’s antique gas pumps, “twice,” and he likes to park his 1936 Ford truck “out front” to enhance the old country store appearance.

As a docent, McKnatt is fond of the museum’s Main Street Village.

“I like the barber shop especially because my granddaddy was a barber and the barber’s pole came from his shop,” said McKnatt, who

is also partial to the moonshine still that is located next to the corn exhibit and, “perhaps for a good reason.”

The mural on the village wall that acknowledges the importance of the train coming to Troy is especially important, McKnatt said.

“There’s just so much to enjoy and to learn at the Pioneer Museum of Alabama,” he said. “It‘s an outstanding museum of pioneer history. I’m proud to be a part of something so important to Pike County and to all Alabama.”