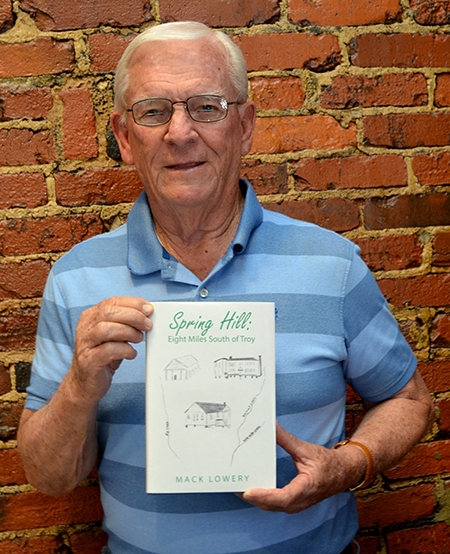 Mack Lowery smiles when he recalls how “at last” a bell went off in his head and, just that suddenly, he had the title of his first book of prose.

“I wanted the book to be titled “Spring Hill” because that’s what the book is about but there had to be more to the title,” Lowery said.

As Lowery, verbally mulled over the title, his wife, Jerri, asked, ‘Where is Spring Hill?’

“I said, ‘eight miles south of Troy’ And, right then, I had the title to my book,” Lowery said with confidence in his decision.

A year or so ago, Mack Lowery penned a book of poetry and found pleasure and satisfaction in doing so. He remembered that, years ago, a college professor at Troy had encouraged him to write.

“Jack Solomon, said I was not doing golden work with words but, if I would work at it, I would do alright as a writer,” Lowery said, with a smile. “I worked at it and, hopefully, after time, my writing is ‘alright.’”

Spring Hill is a small community “eight miles south of Troy’ in a rather rural part of Southeast Alabama. It’s the “going home” kind of place or either a “going through” kind of place.

For Mack Lowery, Springhill is home.

So, “Spring Hill: Eight Miles South of Troy” is a going back home kind of book. It’s a looking back at the people and places kind of book and it’s a book about the places where, too often, you can’t go back home again except in memory.

“In the book, there are stories about Springhill school being struck by lightning the week before Christmas,” Lowery said. “It’s about the German prisoners who worked on our farm picking peanuts. I was only in first grade but I remember that time in my life like it was yesterday.”

“Spring Hill: Eight Miles South of Troy” is about farms, country stores and chickens. It’s about leaving home and going to Oklahoma and “seeing things I’d never seen before or known existed, like longhorn cows. But all the while, wishing to be back eight miles south of Troy.”

All the seeing and longing were fodder for the book that Lowery was destined to write about “Spring Hill: Eight Miles South of Troy.”

“The book is about people, places and good times and other times,” Lowery said. “I call a lot of names, many real names, perhaps some not. I was as right as I could be in remembering. If something in the book is wrong, well, that’s just the way I remember it.”

Lowery s poems were gifts of the heart; his book is a gift of place.

“Writing the book brought back so many wonderful memories of people and places and times,” he said. “I hope those who read ‘Spring Hill: Eight Miles South of Troy’ will enjoy it as much as I enjoyed writing it. That was like going back to how home used to be.”

A book signing will be held for Mack Lowery from 2:30 until 4:30 p.m. Sunday, May 22, at the Spring Hill Baptist Church Fellowship Hall. Everyone is invited to come and enjoy a time of looking back at the people, places and events that are the trademark of the community “eight miles south of Troy.”