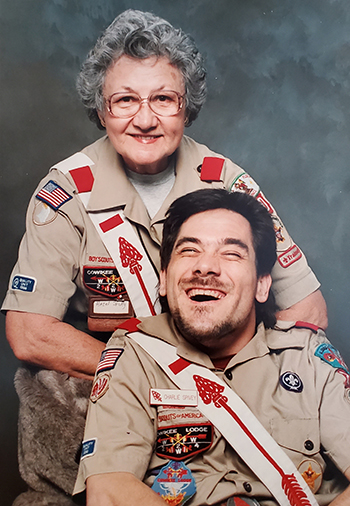 When Hazel Taylor Spivey was 18 years old, she was at a bus station in need of three cents to pay for a class of milk. A stranger took the change out of his pocket and said “take what you need.

Spivey has never forgotten that kindness, “that blessing,” in her life.  She has dedicated her life to being a blessing to others.

Spivey is a native of Pike County but moved to Ozark around 1990 so her son, Charlie Spivey, could be closer to his school, Vivian B. Adams.

Hazel Spivey has dedicated her time and energy to doing for others, beginning at home with Charlie.

Spivey has volunteered thousands of hours to her community and raised tens of thousands of dollars to support the causes in which she believes.

However, Spivey’s contributions to Boy Scouting have been at the heart of her volunteering spirit.

She has served on pack and troop committees, as unit commander, has organized and hosted unit and district functions, including courts of honor and district roundtables.

Hazel Spivey has received many honors from the Alabama Florida Council of the Boy Scouts of America including the Silver Beaver Award which is one of Scouting’s highest recognitions.

She sang on local radio and television stations including WTBF, WBAM and WSFA. Those who know Hazel Spivey will remember her renditions of “It Wasn’t God Who Made Honky Tonk Angels” and “Making Believe.”

But, where she was, and is, most blessed to be “is helping others.”

Hazel Spivey will celebrate her 90th birthday in Ozark on Saturday.