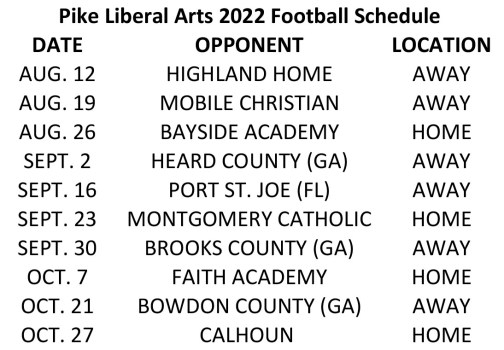 Pike Liberal Arts School announced on Monday the schedule for the school’s inaugural season in the Alabama High School Athletic Association for the fall 2022 season.

Pike will spend its first two seasons in Class 2A without a region home because the AHSAA had already made realignments prior to Pike’s application to join the public school athletic association. That means the Patriots won’t have the opportunity to compete for a region championship or playoff appearance for the next two seasons. Regardless, almost every single game this season will be a first as only one school on the schedule is a team that Pike has played in its 51-year history. 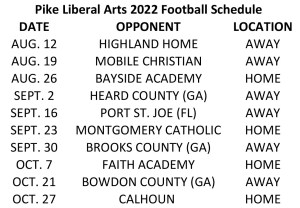 Pike will start its venture into the AHSAA with a pair of road games to the start the season against Crenshaw County’s Highland Home on Aug. 12 before traveling to Mobile Christian on Aug. 19. Mobile Christian is the only familiar foe – of sorts – on Pike’s schedule as the two schools met four times from 1998 until 2001 with the Patriots losing each matchup. Pike welcomes Bayside Academy from Daphne on Aug. 26 for the Patriots’ first home game in the AHSAA.

Pike then hits the road again for another pair of out-of-state games. Pike will travel to Heard County High School in Georgia on Sept. 2 and then head down to Port St. Joe High School in Florida on Sept. 16. The Heard County Braves are based in Franklin, Ga. and the school is coming off a 6-6 2021 season with a playoff appearance. Port St. Joe is located 36 miles south of Panama City and the Port St. Joe Sharks are coming off an 8-2 season in which the school made the playoffs, too.

Pike heads back to Georgia on Sept. 30 to face Brooks County High School in South Georgia. Brooks County is the reigning Class A-Public State Champions in the Georgia High School Association (GHSA). Pike is back at home on Oct. 7 against Faith Academy.

The Patriots head right back to Georgia on Oct. 21 to face off with the Bowdon County Red Devils in West Georgia, coming off a 10-2 2021 season in Class A-Public in the GHSA. The Patriots will close out the season on Oct. 27 at home against Class 1A’s Calhoun Tigers.

Pike has certainly not put together a schedule that can be considered “weak” as all but one team on the schedule held a winning record and made the playoffs in 2021. The Patriots’ 2022 opponents held a combined 78-43 record with 10 of those losses coming from Calhoun. Of the 10 opponents, seven made it to at least the second round of the playoffs, three made it to at least the Final Four and one won a state championship.