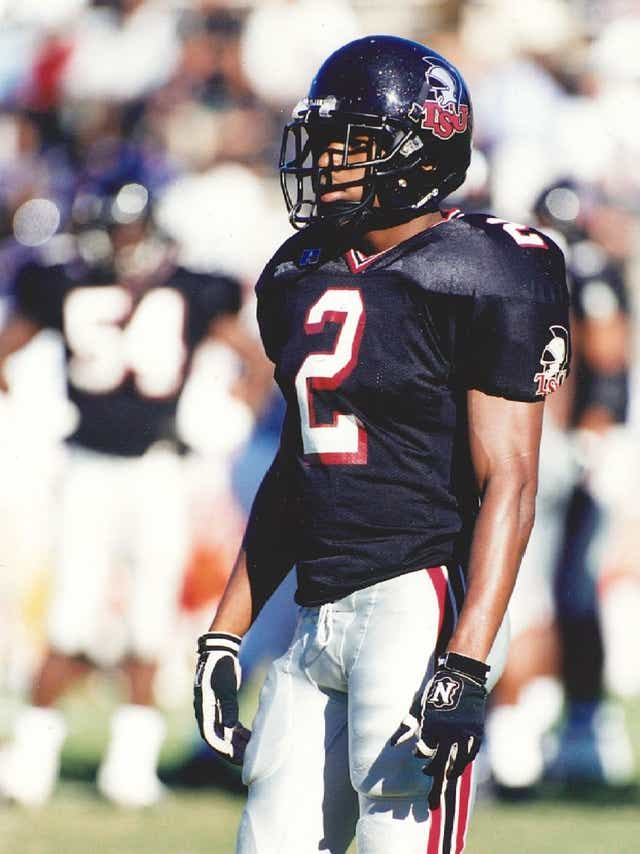 Eric Sloan was a star defensive back at Troy State before becoming a superstar in the tech world. (Photo courtesy of Troy University Athletics)

At the 31st Annual Tip Colley Awards Banquet in Troy on May 16, former Troy State football All-American Eric Sloan will give a speech to those in attendance.

The Tip Colley Award is presented annually to senior Christian athletes from high schools in Pike County “who have excelled in their walk of faith, academics, athletics and community service.” Male and female winners will be awarded $1,500 scholarships, while the runners-up will also receive $500 scholarships.

The Tip Colley Award honors the late Dr. J.O. “Tip” Colley, who was a graduate of the old Troy High School where he was an all-state football player. He went on to become a successful physician and a staunch supporter of athletics.

Sloan is a College Park, Ga. native that walked on as a baseball player at Troy State University before joining the football team and eventually becoming one of the top defensive backs in all of Division I-AA (FCS), earning All-American honors and even Southland Conference All-Decade honors. Sloan was also a star for the Troy track and field team.

“A lot of the memories I have, some of the most positive memories, molded me into what I am today,” Sloan said of his memories of his time at Troy. “Not only from the athletic standpoint but also from a community aspect that Troy has and the school environment Troy has. The relationships I built in Troy have helped propel and further me in my career, not only as a worker but as an entrepreneur.”

Following his graduation from Troy, Sloan signed with the San Diego Chargers in the NFL for two years and then received an opportunity to play for the Birmingham Thunderbolts of the original XFL. Sloan was second in the XFL in interceptions with four and returned two of them for touchdowns in the XFL’s lone season. Sloan appreciated his opportunity to play professionally and said that he fully supports the upstart USFL and the future return of the XFL, slated for a 2023 open.

“I played with San Diego for awhile and was released form there and didn’t know what I was going to do and then the opportunity with the XFL came up and it really helped me,” Sloan said. “Sometimes you get lost chasing your dreams and then all of a sudden that dream is taken away. Now it’s like, what am I going to do? What opportunities are out there for work?

“You have so many things in your head. Do you feel worthy? What are the next steps? What do I do now? So, for the USFL and another form of the XFL to allow those athletes the opportunity to further their professional athletic aspirations, I’m all for it.” 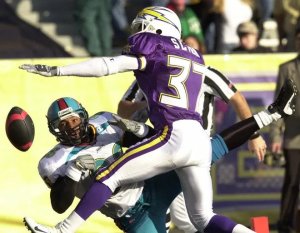 Sloan played for the Birmingham Bolts of the XFL. (Submitted photo)

Following his departure from the football field, Sloan earned his MBA from Troy and jumped into the information and technology world. After years of grinding away, he is now the President and CEO of 1 Sync Technologies, a multi-million dollar government contracting firm, where he leads a global company focused on providing technology solutions to federal, state and municipal governments, as well as commercial clients. Everything Sloan learned playing sports, helped him in his career outside of athletics.

“In sports, we have to get up during the summer and every day to do workouts and from there you may have to go to class and then after class you have to go to practice and after practice you might have study hall or need to watch film,” Sloan said. “All of that transfers to either the corporate world or even entrepreneurship. In the corporate world, you still have to get up early to get to work or to do the things you need to do. You have to have the self-initiative to be responsible enough to go in and do the additional studying or training, so that you can excel in your corporate career the same way you did in your athletic career.

“With entrepreneurship it’s the same thing, you have to get up early to ensure that your plans are in place and creating a vision for your company. You have to work hard to achieve those attainable results.”

Sloan is also the Director of AFCEA Montgomery Chapter’s Education Foundation, an organization that has given over $1 million in scholarships to students pursuing degrees in STEM related initiatives. He also resides on the Board of Directors for a number of organizations, including the Montgomery Area Chamber of Commerce. Sloan’s wife Nicole is also a Troy University graduate. The two met while in school at Troy, and Nicole Sloan has also become a successful entrepreneurship with her own real estate company in Montgomery.

Sloan will bring his story of hard work and success to the students in attendance at Monday’s Tip Colley Awards Banquet.