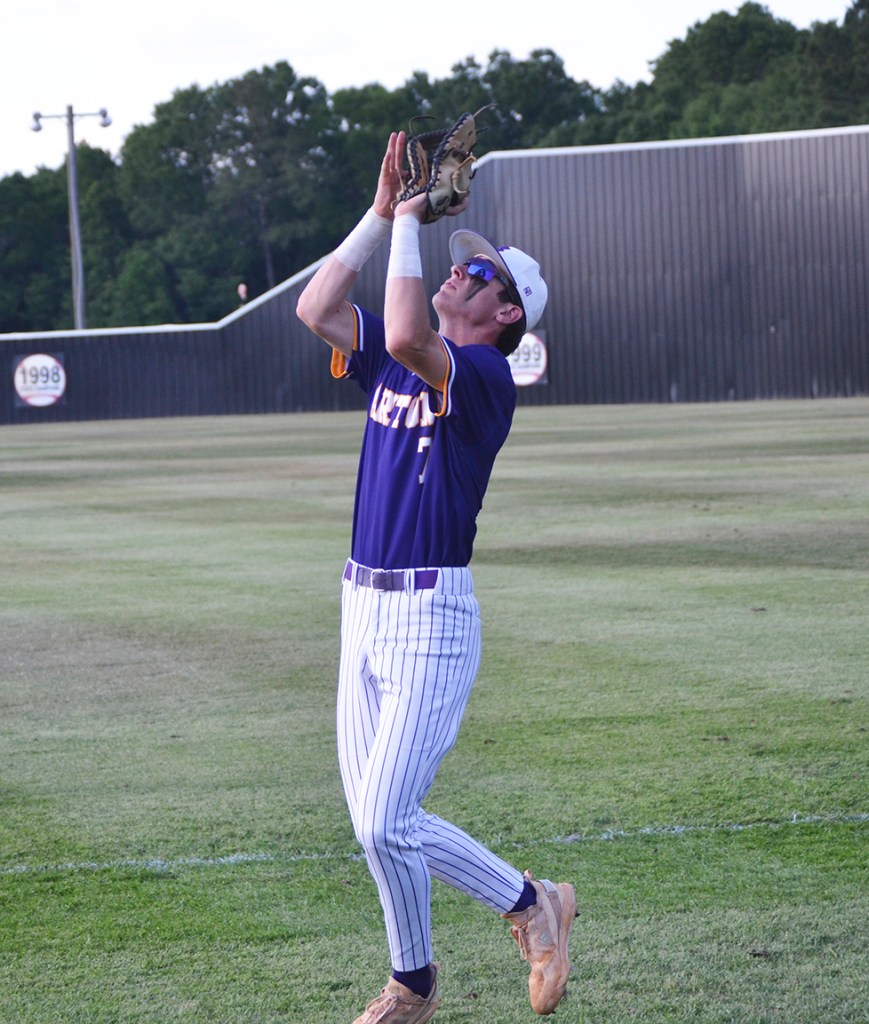 Connor Thrash (7) catches a fly ball. Thrash went 5-for-5 with a homer in a game two Ariton win over Long. (Photo by Josh Boutwell)

The Ariton Purple Cats split the first two games in a best-of-three series with the GW Long Rebels in the Class 2A State Baseball Playoffs on Thursday.

Long’s baseball field in Skipperville was jam packed with fans and students from both schools overflowing in the exciting matchup.

In game one, Long took control in the second and third innings, scoring five runs during that span, and a late comeback attempt by Ariton wasn’t enough to overcome Long’s lead. The Rebels picked up a 7-3 win to gain advantage in the series.

Caden Collier, Lawson Leger and Connor Thrash each earned one hit and one run in the loss. Phenix Griffin pitched five innings and retired one batter, while giving up six hits and one earned run. Leger pitched one inning and allowed one hit and no runs.

Game two came down to the wire with both sides battling back-and-forth from the beginning. Long took a 1-0 lead in the first inning but Ariton answered back to tie the score in the bottom of the inning. Long then scored one run in the fourth inning and three in the top of the fifth inning as it looked like the Purple Cats were facing a case of déjà vu, trailing 5-1 in the bottom of the fifth. Thrash then blasted a three-run home run that cut Long’s lead to 5-4. In the sixth, Paxton Steed scored on an error to the tie things up 5-5.

Long retook the lead with two runs in the top of the seventh inning, going up 7-5, but Ariton answered right back in the bottom of the inning as Dalton Murphy’s ground ball drove Thrash home followed by Griffin scoring on a walk as the bases were loaded, to the tie score 7-7 and force extra innings.

Neither side managed a run in the eighth or ninth innings but in the bottom of the 10th, Landon Tyler hit a line drive single into center field that drove Collier home for the walk-off run and to tie the series 1-1, forcing a third and deciding game.

Thrash came up big at the plate in game two, going a perfect 5-for-5 with two doubles, a home run, three RBIs and two runs. Collier and Murphy also earned two hits each. Tyler pitched four innings and struck out three batters, while giving up three hits and one earned run. Leger pitched four and 1/3 innings with five strikeouts along with four hits and no earned runs allowed. Coleman Bragg also pitched an inning and fanned one batter, while giving up four hits and three runs. Hughes Hummer gave up no hits or runs in his 2/3 of an inning on the mound.

Ariton and Long will play at 5 p.m. in Skipperville on Friday with a spot in the Class 2A State Championship on the line.