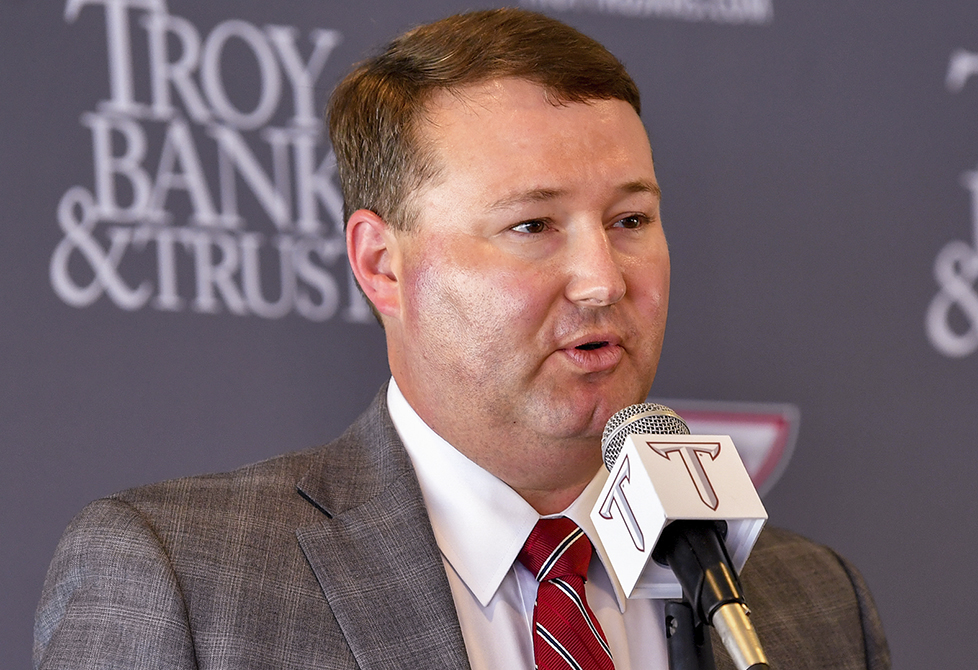 The Troy University Athletics Department is getting set for its annual Trojan Tour beginning this weekend and in preparation for the kickoff of the tour, Troy Athletic Director Brent Jones spoke with The Messenger.

Troy Athletics will be hosting its biggest Trojan Tour ever this summer with stops in Troy, Phenix City, Dothan, Enterprise, Greenville, Birmingham, Huntsville and Montgomery along with stops in Fort Walton Beach, Fla. and Pensacola, Fla., as well.

Jones will be joined by Troy football coach Jon Sumrall, women’s basketball coach Chanda Rigby and men’s basketball coach Scott Cross at each stop with different additional coaches joining them, too. It all kicks off this Saturday in Troy at Tailgate Terrace at noon prior to Troy’s baseball game with Coastal Carolina. Jones said that along with the meet and greet and question and answer session with the coaches, there will be a BBQ lunch, inflatables and baseball coach Skylar Meade will even be stopping in to speak before his team faces off with Coastal Carolina.

“It’s a meet and greet session, it’s a time to be able to hear stories, get caught up on schedules and recruiting and all of those things that go into making a successful year,” Jones said. “It’s also a chance for us to say, ‘Thank you,’ to the fans.

“This past year in football we finished second overall in attendance in the conference and for the first time both men’s and women’s basketball led the Sun Belt in attendance. We wouldn’t be able to do that without our fans. This is a way for us to go out and engage with the fans and let them know what to expect this year.”

Jones said the feeling around Troy Athletics is electric and he expects that to come across throughout the Trojan Tour.

“I’ll tell you this, the momentum is real,” he said. “You can feel it, it’s palpable. You can really feel it with the hiring of Coach Sumrall, with how well our men’s and women’s basketball teams did, with how good our baseball and softball seasons have gone and what you’ve seen with the other sports. I think Trojan Nation is really excited about this upcoming year and the excitement of some sense of normalcy returning after COVID, as well.”

When looking across Troy Athletics at the various coaches, it’s easy to see that Troy has brought in some of the youngest and hungriest coaches in the Sun Belt along with respected veterans like Rigby.

“Chanda Rigby is the hungriest coach you’ll ever meet and she gets after it like you wouldn’t believe,” Jones emphasized. “I wouldn’t put the age factor in there in terms of who we’re hiring. You’re looking more for intensity, passion, connectivity, recruiting and a fit for us. We’re excited about the coaches we have, I think this is the best group of coaches. They get after it in recruiting very well, too.”

Currently, Troy co-interim softball coaches Taylor Smartt and Holly Ward are guiding their Trojans in the Sun Belt Softball Tournament and Jones said that the school would really jump into its coaching search for a permanent replacement for former coach Beth Mullins following the season.

“We’re still in season right now and our co-interim coaches have done a phenomenal job, as well as our student-athletes,” Jones said. “Once the season completes and everything else, then we’ll start going into that search. We’re going to let the season continue to play out and once it completes, we’ll sit down and take stock in everything and start that search then.”

One of the key topics for Trojan Tour is season tickets, which Jones emphasizes as a huge priority for the athletics department. Something Troy has for a number of years under Jones is offering incentives for season ticket holders that can only be obtained by buying season tickets. Some of those incentives have included replica championship rings, T-Roy bobble heads, Veterans Memorial Stadium dioramas and limited edition mini helmets. This year’s incentive will be a mini helmet that honors the 1987 Troy State team that won a national championship.

“In 2017 when we won the Sun Belt Championship, we all got rings, and I thought how cool and unique would it be if our fans got rings,” Jones said as he holds up a replica ring. “Season ticket holders are the lifeblood of our program. How cool is to say you got a championship ring, too?

“It thanks the people that bought tickets before and then anyone that wants to buy tickets this coming year is part of it, as well. I legitimately saw people put it on and start wearing it. That started it for us. I said that we need to incentivize season tickets. Our fans are phenomenal, so everything we offer with this is something you can’t buy anywhere else. It’s a commemorative piece that you can’t buy anywhere else.”

The Trojan Tour starts this Saturday at Tailgate Terrace in Troy at noon. More information on each stop can be found at https://tinyurl.com/2p8t6xfd.