‘A little lady with a big heart’ honored at TPL 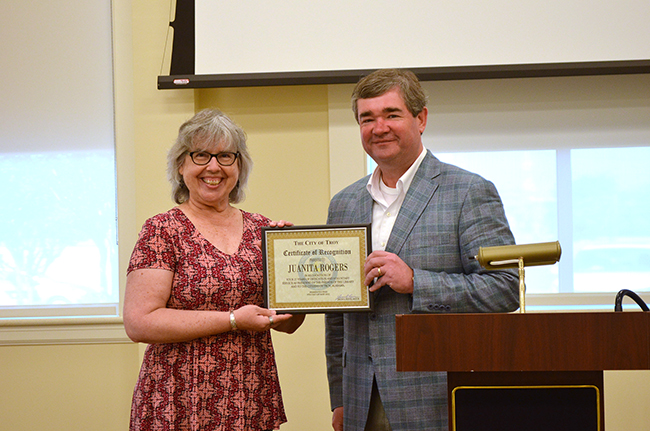 Jaine Treadwell | The Messenger A retirement reception for Juanita Rogers was held at the Troy Public Library Monday. The reception was hosted by Friends of the Library. Joyce Cooper, Friends, accepted the plaque of appreciation from Troy Mayor Jason A. Reeves for Rogers who was unable to attend.

Troy Mayor Jason A. Reeves presented a plaque honoring Rogers’ long and dedicate service to the city’s library and to those whom it serves.

Reeves said he has known Rogers since he was four years old.

“I was in pre-school at Southside Baptist Church and ‘Miss Juanita’ helped take care of me,” Reeves said. “I have never forgotten those times.”

Reeves said, at that time, his family lived in Ebenezer but later moved to Troy and lived on the same street as Rogers.

Having known Rogers for most of his life, Reeves said he appreciates what she has meant to him personally and to the City of Troy.

“Juanita Rogers is a little lady with a big heart,” he said.

Iris Byrd, Friends of the Library, said Rogers was a kindergarten teacher for 10 years before becoming the children’s librarian at the Troy Public Library, a position she held until her retirement.

Rogers has served as president, vice president and treasurer of Friends of the Library.

Byrd said Rogers has helped raise thousands of dollars to support the library and make it possible for Friends to offer books at a cost, most often, of less than a dollar.

“This has created opportunities for young children to learn to love books and to love to read,” Byrd said.

Friends of the Library has books for children and adults and raises dollars annually for non-budgeted library projects.

Friends of the Library and volunteers operate the Book Nook at the Troy Public Library. It is open Monday through Friday from 9 a.m. until 4 p.m.  and until 11:30 a.m. on Saturday.

Volunteers are always needed and welcomed. Those who are interested in being a Friend are encouraged to visit the Book Nook for more information.