‘Thunder on the Three Notch’ 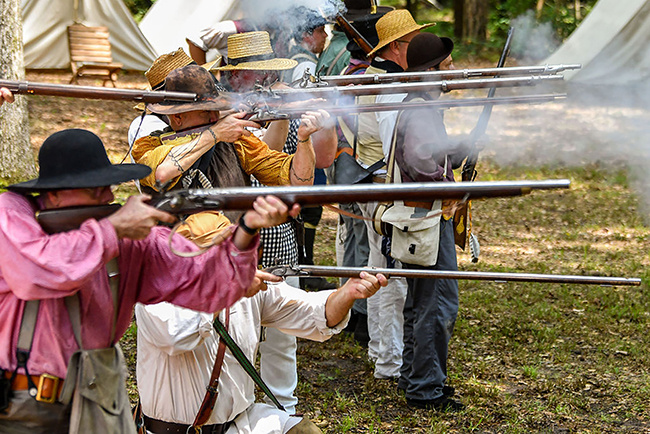 Contributed Photos Thunder on the Three Notch will be held this Friday and Saturday at the Pioneer Museum of Alabama. The re-enactment of the skirmish will take place at 2 p.m. both days.

The “Thunder” will bring about a skirmish of historical significance here in the Pike County area this weekend.

“Thunder on the Three Notch” at the Pioneer Museum of Alabama at 2 p.m.  Friday and Saturday will depict the Creek and Indian War of 1836, which, in a large part, took place in Pike County, said Bob McLendon, a historical re-enactor.

As reference, in 1824, the Three Notch Road came through Pike County and connected Pensacola with Fort Mims in Russell County.

“Thunder on Three Notch” will reenact the battle between the settlers and the Creek Indians,” McLendon said. “The white settlers were encroaching on the Indians’ land and destroying their way of life. The Indians rose up against the settlers. Much of the militia came out of Barbour County. A few of the settlers who took up arms were women.”

McLendon said the battle scene will be of interest in that visitors will see the sights and hear the sounds much like those that occurred around Hobdy’s Bridge in 1836.

Before and after the 2 p.m. skirmish, visitors will have opportunities to visit the campsites of both the militia and the Creek Indians and learn from them what it was like to be in battle.

“Visitors will be able to get a close-up look at the clothes worn by the Creek Indians and the militia as well as the guns and other weapons they used,” he said

McLendon said only a small number of Creek Indians was killed and even fewer of the militia,

“Afterwards, a large number of the Indians want to Florida and joined the Seminoles,” he said. “‘Thunder on the Three Notch’’’ is a way to experience local history and learn more about Pike County 200 years ago.”

The skirmish between the local settlers and the Creek Indians is just one of the living history opportunities available at “Thunder on the Three Notch.”

Barbara Tatom, director of the Pioneer Museum of Alabama, said the event will also feature a blacksmith, flint napper, circuit riding preacher, a spinner, a weaver and other demonstrators of the pioneer way of life.

Sips of Troy will have a truck on the grounds with hotdogs, hamburgers and tater tots and Two Brothers will be available on Saturday with the ice cream wagon.

“The weather should be nice both days so we invite families to come out, enjoy the outdoor activities and events and also visit the indoor exhibits of pioneer life,” Tatom said.

Pioneer Museum hours are 10 a.m. until 5 p.m. for “Thunder on Three Notch” Friday and Saturday.