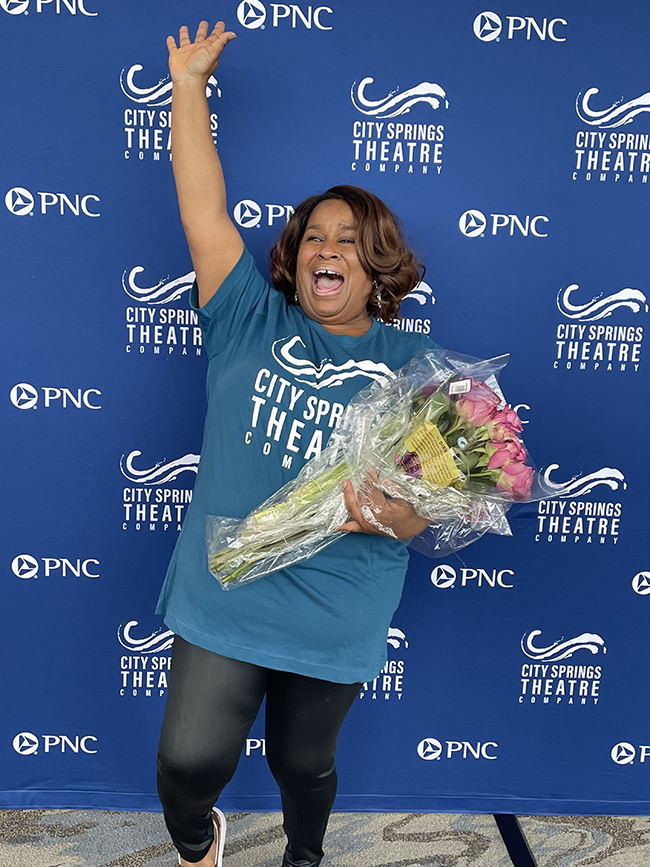 “The Color Purple” opened May 6, at the City Springs Theater in Sandy Springs, Georgia with one of Troy’s own, Shelia Fayson Jackson, on stage.

“But, I have never seen Shelia perform like she did Saturday night,” Jordan said. “When she came on stage, she lit up the whole theater. She was amazing. She was dancing and singing and you could tell she was having the time of her life.”

Jordan led a group of ladies from the senior center to see Jackson perform in The Color Purple musical.

“We were all so happy for Shelia,” Jordan said. “We were proud of her and for her. She was right where she should be, on the big stage.”

Alvin Sankey took his mom, Susie, to see Shelia on stage as a Mother’s Day gift.

“I couldn’t have given her anything she would have appreciated more,” Sankey said. “For us, it was a joy to see Shelia. When she came on stage, everybody from Troy screamed. We were so excited for her.”

Sankey said Jackson was in her element — singing, gesturing, dancing — and with that big smile of hers. She was amazing as always.

Sankey said, at the end of the musical and “I Am Here” was being sung, his mother cried – with the song and “for the joy of that beautiful time for Shelia.”

“Her stage presence was not just good, it was spectacular,” Moultry said. “Shelia was breathtaking. I was so proud for others to see what Troy has seen and known for a long time.”

Moultry said Jackson has always been willing to share her talent in support of her community and is a goodwill ambassador for the City of Troy.

“Shelia represents Troy extremely well,” she said. “She deserved the opportunity to be on a big, city stage.”

Jackson is most often on stage to “just sing.”

“That’s easy,” she said, with a smile. But, being in The Color Purple, I had to learn dance steps and to be in time with music. That was very physical. It took a lot of energy…much more than I thought I had.”

But having the opportunity to perform in The Color Purple has reminded Jackson of her love of theater.

“I’ve not done theater since “Ma Rainey,’” she said. “I’m so thankful for this opportunity to do theater once again.”

The support from the extended Troy community that Jackson has received has been heartfelt.

“Seeing all my friends from home standing out in the lobby brought tears to my eyes,” she said. “I can never say how much it meant to me. It did my heart good.”

Jackson thanks Natalie DeLancey, executive director of the City Springs Theater Company, Kamilah Long, director and Louis Webb, music director, for the opportunity to “just be a part of something so incredible.”

DeLancey said the production of The Color Purple features an exceptional cast that has poured their heart and soul into every production.

“Our audiences are raving about the complex, yet uplifting, storyline of the powerful musical,” she said.,

The Color Purple will be performed on Thursday, Friday and Saturday the weekends of May 12-14 and 19-21. Tickets are available online.