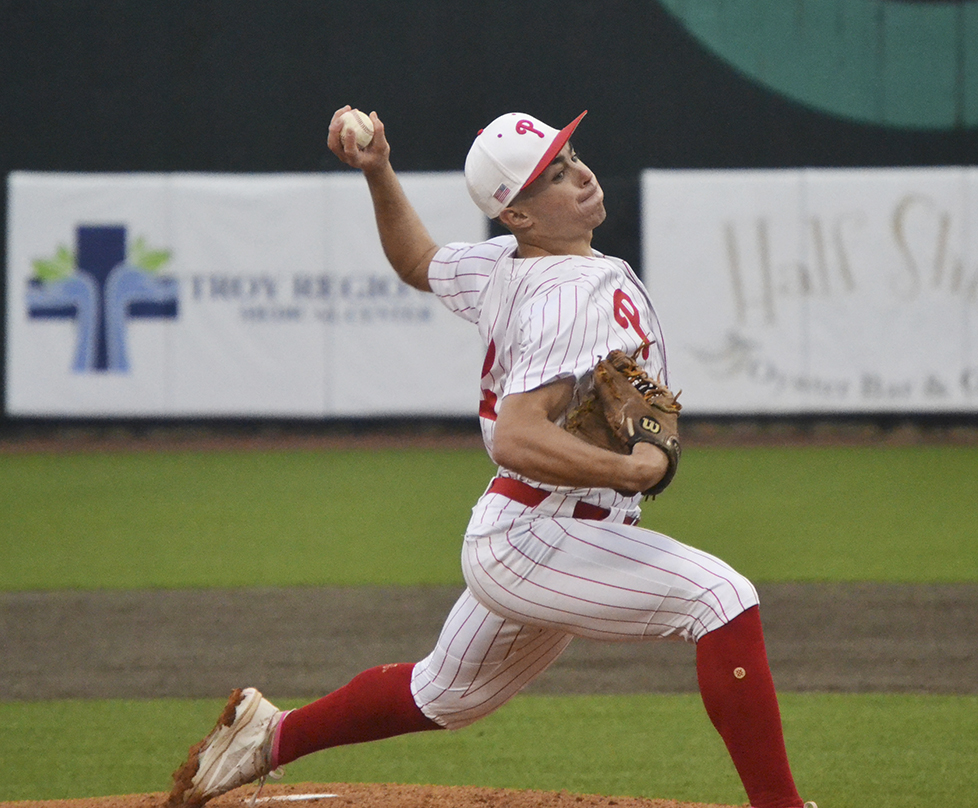 Pike senior Drew Nelson (2) will look to continue his dominant performance on the mound in the state championship this Wednesday. (Photo by Josh Boutwell)

The Pike Liberal Arts baseball team (30-4-1) is no stranger to state championships and will look to end their dominant run in the AISA by adding a fourth straight title to the trophy case on Wednesday morning.

This time next year, Pike hopes that it will be in contention for an AHSAA championship as the Patriots move into public school play but first, they want to end their run in AISA on a high note.

“I’m extremely proud of this group,” Pike baseball coach Rush Hixon said. “This group is a lot of fun to be around on a day-to-day basis and I made the comment the other day that I wish we could play another full season with these guys. I love being around them and I’m proud that they set a goal and have the opportunity to achieve it.”

Pike won AISA Class AAA State Championships in the 2018, 2019 and 2021 seasons with the only gap between those titles being the COVID-19 shortened 2020 season in which a champion was not crowned. Standing in the Patriots’ way of that goal is a familiar foe, the Glenwood Gators (30-3).

For the entirety of the season, Pike and Glenwood have been the top two teams in AISA and the only AISA blemish on either team’s record is each other. Pike defeated Glenwood at home on March 24 and Glenwood answered with a win of its own on April 13. The loss to Glenwood is the last time the Patriots have felt defeat this season.

“We didn’t play very well offensively,” Hixon said of the April loss. “We played at their place and I thought they did a good job of jumping on us early and we never could recover from that.”

Pike and Glenwood both played things close to the vest in regards to its pitching staff with both teams deciding to play young pitchers in not wanting to tip their hand for a future matchup.

“It was by design,” Hixon confirmed. “We knew that it would be them down the road we would have to face when it really mattered. We didn’t want to give them much to scout and they didn’t throw either of their best guys at us either in the same hopes.”

Pike’s top two pitchers, Drew Nelson and Press Jefcoat, have been brilliant in the postseason. In Pike’s two playoff series thus far – both clean sweeps – Jefcoat and Nelson have combined for 37 strikeouts and just nine hits and two earned runs allowed. Nelson has also been stellar at the plate, going 7-for-11 with seven RBIs, a home run, a double and two runs in the playoffs. Nelson’s final month on the mound of the regular season was also jaw dropping as he struck out 32 batters in 11 innings and allowed no hits or earned runs during that span.

Hixon said that his Patriots have to worry about themselves and playing Patriot baseball against Glenwood.

“We have to execute what we do,” he said. “We don’t get into our opponents too much, we just have to execute our game and our brand of baseball. If we do that, we’ll be in the game with a chance to win when it matters. We have to focus on us and execute throwing strikes, hitting strikes and making routine plays.”

Pike and Glenwood will battle it out Wednesday morning in Montgomery at Paterson Field in a doubleheader beginning at 10 a.m. with the second game taking place following the end of the first. If a third game is necessary it will be played Thursday morning at 11 a.m.