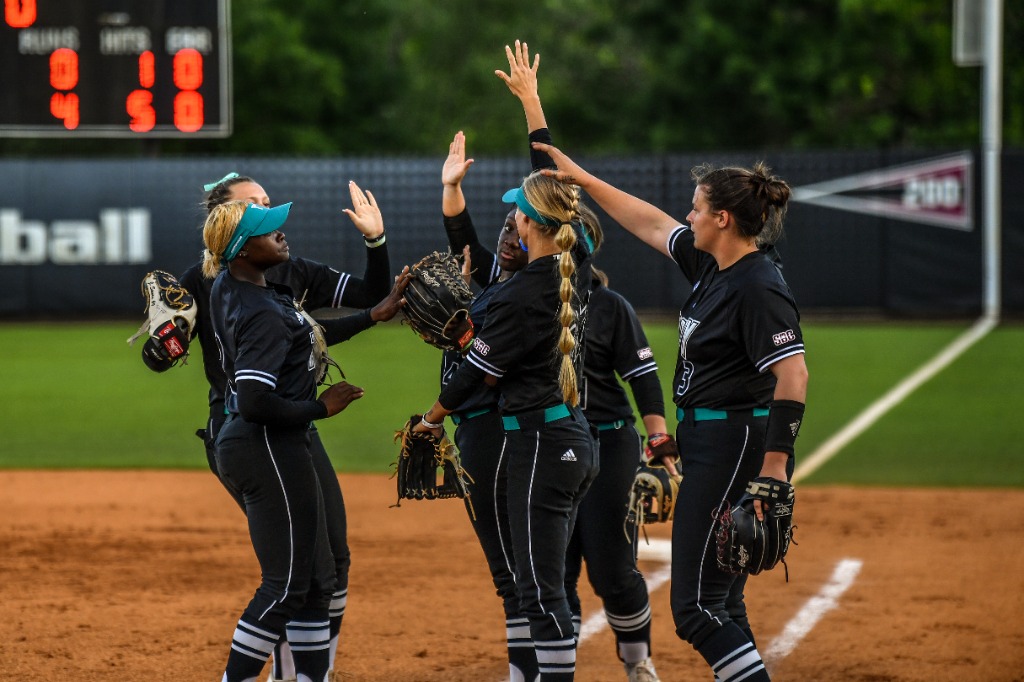 The Troy Trojans picked up a Sun Belt Conference series win over rival South Alabama this weekend to secure a first round bye in the upcoming conference tournament.

After Troy bested South Alabama in game one Thursday, the Trojans secured the series win on Friday by a score of 7-2 in an emotional game.

Troy honored World Ovarian Cancer Day before the game and for the ceremonial first pitch, Troy pitcher Leanna Johnson threw to South Alabama catcher Kassidy Wilcox. Leading up to the game, Troy paid tribute to Brantley native and former Mississippi State player Alex Wilcox, who passed away due to ovarian cancer in 2018. She was a high school teammate of Johnson and the sister of Kassidy Wilcox.

“We started playing rec ball together when we were between 9-12 (years old),” Johnson said of Alex Wilcox before the game. “Whenever all-stars were picked, we were always on the same team.

“Alex was a baller. She was a phenomenal pitcher. She and I went to the same pitching coach and she would throw first before me on Wednesdays. I got to watch her finish her sessions, and she was just good. Everything she did was just good.”

The pair helped Brantley win back-to-back Class 1A State Championships in 2015 and 2016 but in high school Alex Wilcox was diagnosed with ovarian cancer, causing her to move from pitcher to the outfield as she battled the illness.

“I remember her senior year, we played Goshen for our first game,” Johnson recalled. “We put her in the bottom of the lineup so that she could get there for (chemotherapy). By game time, she was out there playing centerfield.

“To follow in her footsteps and pick up where she left off (at pitcher) meant a lot to me. She was a great athlete on the field and a great teammate off the field no matter what she had been through that day.”

Troy co-interim head coach and pitching coach Holly Ward was teammates with Alex Wilcox at Mississippi State before her passing, as well.

“There is definitely a bond that is so special between Leanna and me because of Alex,” Ward said. “We both are so lucky to have known her and to have been impacted by her. Every time I see a butterfly on the field, I say, ‘Alex is there with us.’”

The Troy softball team wore teal hats, belts and ribbons on Friday in honor of ovarian cancer awareness, as well. Troy’s bats were on fire all game as Taylor McKinney went 2-for-4 with a home run, two RBIs and two runs. Kelly Horne also went 2-for-4 at the plate with a home run, one RBI and two runs. Horne’s homer placed her all alone in fifth place of Troy’s single-season home run record. Skipperville’s Libby Baker pitched all seven innings and struck out five batters, while giving up four hits and no earned runs.

In Troy’s regular season finale on Saturday, Troy fell 9-0 to South Alabama on Senior Day for the Trojans. Jade Sinness and Taylor McKinney were the only Trojans to earn hits on the day.

Despite the loss, Troy still won the series 2-1 to finish 15-12 in the Sun Belt to finish in fourth place and earn a first round bye in the Sun Belt Conference Tournament. Troy will play UT-Arlington in the second round of the double elimination tournament. The game will stream live on ESPN+ at 1 p.m. on May 11.