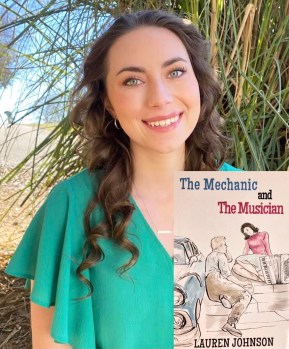 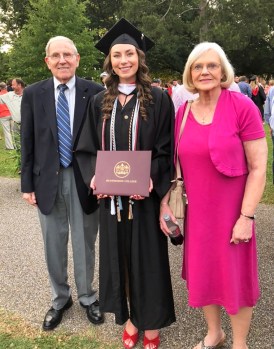 Johnson’s book is about the relationship between her grandparents. Pictured, from left, are Steve Dancinger, Johnson and Nancy Dancinger at her Huntingdon College graduation. (Submitted photo)

After Johnson graduated from Pike, she received an athletic scholarship to play basketball at Huntingdon College. During her college career she interned with NewSouth Books and also spent her summers back home in Troy as an intern at The Messenger. Since graduating from Huntingdon, Johnson has been working as a general news reporter at the Opelika-Auburn News.

Johnson’s book, “The Mechanic and the Musician,” is the real-life story on the relationship of her maternal grandparents Nancy and Steve Dancinger.

“This is something I’ve wanted to do for a long time, just to record the story of my grandparents,” Johnson recalled. “I could have it forever and pass it down to other family members.”

Johnson’s senior project involved writing about any subject in a minimum of 30 pages, so she decided it was the right time to write her first book, which she ultimately decided to self-publish through Amazon.

“I saw it as an opportunity to reach my goal of writing my first book,” she said. “After I turned it in for my final project, I started looking at how to get it published, what different routes to take. I looked at traditional publishing through a publishing house but decided self-publishing was the way to go for this.”

Johnson said writing and publishing the book was challenging but was able to lean on her time at The Messenger while writing, as well.

“It was a learning experience,” she said. “I did summer internships at The Messenger, so I used some of the things I learned there, as far as interviewing and writing, while interviewing my grandparents for the book.

“I had a great advisor, who would read my drafts every week and help me with revisions. I watched a lot of YouTube videos to figure out how to format it and make it fit with Amazon’s direct publishing guidelines. The formatting was almost more difficult than writing itself. I cried a few times and even had to go to Best Buy to get the ‘Geek Squad’ to help me after I messed something up with my laptop. It was definitely a learning experience. I had some help in some areas, as far as editing, and a lot of self-learning and self-teaching going on.”

Regardless, Johnson said that she was thrilled with the way the novel came out.

Johnson said that she’s already working on her second novel, which will be about the life of her paternal grandmother. “The Mechanic and the Musician” can be purchased on Amazon at the following link, https://tinyurl.com/576peddf.