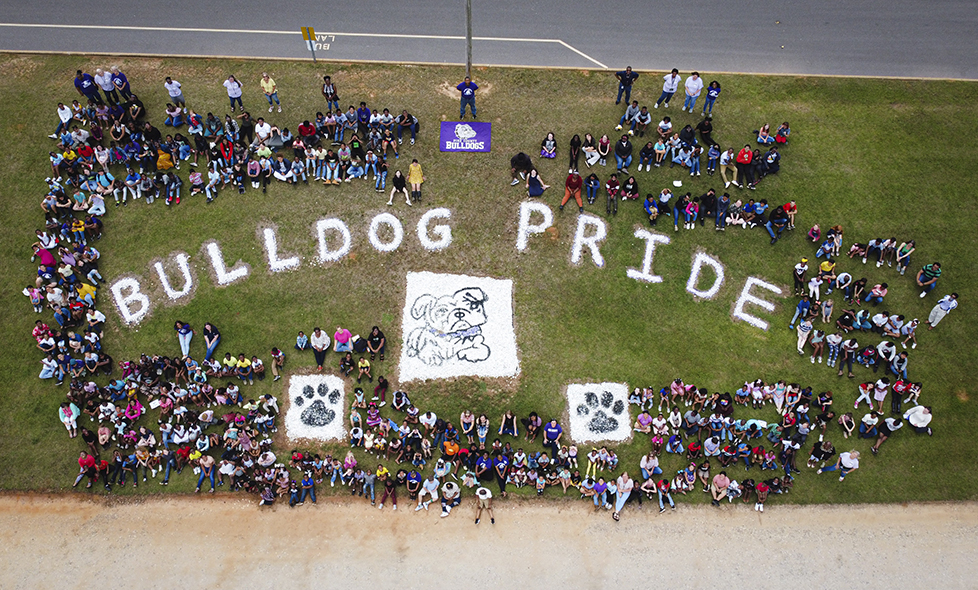 Pike County Elementary School will be implementing a drone program for students in STEM classes beginning next fall but one PCES class is getting a head start.

Pike County fifth grade teacher Lytelia Berry is getting her students ready to learn more about drones in the future. The drone idea came about earlier this spring when Berry was tasked to take a school picture of students by the “Bulldog Pride” sign in front of the school.

“They wanted me to take a picture that looks down on it and that was going to be a challenge and getting up on a ladder and everything,” Berry said. “Then, our intern Ms. Meg (Wardrup) said, ‘I have a drone,’ and my heart just dropped. I thought that would be a cool way to do it.”

Wardrup, a Troy University senior and teaching major, has experience in using drones as a wedding videographer. Once Berry’s students saw the video and pictures Wardrup took, Berry knew they were on to something.

“Once she got it and the kids looked at it, the finished product, they were amazed,” Berry recalled. “I immediately went out and bought one of our own, so our kids could be able to start working with it even though there is just a few weeks left in the school year. Once they saw that video their minds were blown.”

Wardrup said she was shocked that her simple idea for a class picture was developing into a potential drone program at PCES.

“It’s very exciting,” Wardrup said. “I just thought I would get my drone and we would take some pictures and then it would be done, but Mrs. Berry came in and handed me her phone (the next day) sand said, ‘Find me a drone.’”

Berry then managed to purchase a MacBook and video editing software, as well. PCES loved the idea and beginning next year, teachers will implement drones into their STEM classes. Earlier this year, Berry gave her students an assignment to come up with a plan for how they would use a rocket ship and she said that some students talked about how they would program the ship to go places they want to see and take pictures, which is something drones can actually do. Berry plans to bring in someone from Auburn University to demonstrate a high-tech drone the university uses in the coming weeks, as well.

Drones have become a part of a number of industries in recent years, including a big part of the military, and getting students ready to work is a big goal for STEM. Giving students at smaller rural schools, like PCES, experiences with hands-on STEM programs can have a big impact on their futures, as well.

“My goal is to get them exposed to some of the stuff they never would have had the opportunity to be exposed to otherwise,” Berry emphasized. “We do a lot of things with engineering, things they can build with their hands, and this is a little more high-tech for them that they wouldn’t get exposed to otherwise.

“Once we get into our program deeper they will be more prepared and will have a chance to see it goes beyond just taking pictures when they get older and can have some other opportunities. They will get exposed to that technology at a more advanced level and I think it’s going to be a major impact on our students because this is a chance they wouldn’t have without STEM. This is something that will be able to stretch far beyond their imagination.”