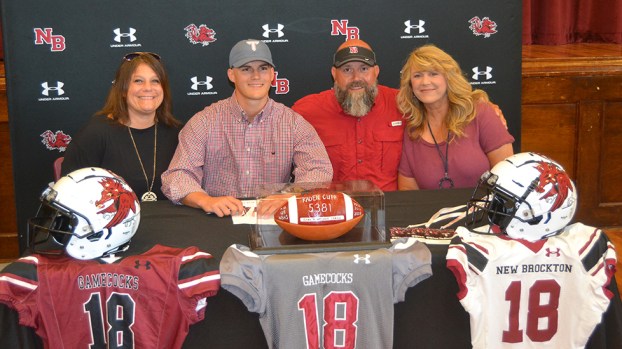 New Brockton senior Kaden Cupp will be joining the Troy football team as a walk-on. Pictured, from left, is his mother Amanda Watson, Kaden Cupp, his father Zack Cupp and his stepmother Cheryl Cupp. (Photo by Josh Boutwell) 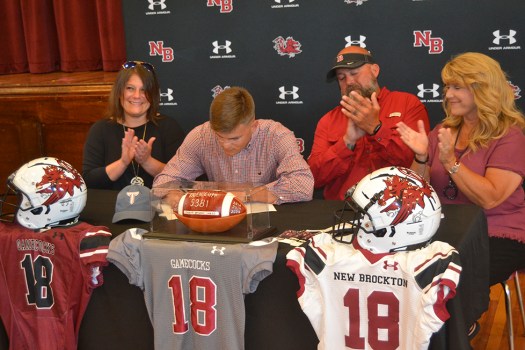 Cupp comes to Troy after being a starting quarterback for four years at NBHS, where he amassed a school-record 6,573 total yards and 73 total touchdowns. Those numbers included 1,927 rushing yards and 25 rushing touchdowns in his career along with 4,646 passing yards and 48 passing touchdowns, as well.

Cupp accepted the offer to join the Troy program as a walk-on over offers from other schools like Shorter University and Mississippi College.

“Growing up and going to football games at Troy and being able to go there and watch the scrimmage there (this spring) and have the opportunity to watch more practices, it just felt like home there,” Cupp said. “Going to camp there, too, it felt like I could play there and I really felt comfortable there.”

Cupp will be joining former New Brockton teammate Russell Weeks on the Troy football team. That and the fact that Troy was so close to home just added more positives to the Trojan program for Cupp.

“It’s awesome we get to link up again, so I’m happy about that,” Cupp said of joining Weeks at Troy. “Being 45 minutes from home means I’m not too far from family but still far enough to have that college experience, too.”

Cupp was the true definition of an “athlete” in high school. While Cupp spent the majority of his time at NBHS as a quarterback, he also played some at receiver and safety. He’s also a multi-sport athlete having been a member of the New Brockton varsity basketball, baseball and track and field programs. At Troy, though, he will transition full time to “slot” receiver.

“I feel like it will take some time getting used to it but I feel like I’m ready to showcase my speed and I know I can catch the ball,” Cupp said with a smile. “It will be different but it will be fun at the same time.”

“I think he’ll be great,” Holmes said of his move. “At the end of last year we started to talk about how he was more of an athlete and where he would fit in at the next level.

“Obviously, he went to some camps and a lot of the guys at those camps felt like he was a ‘slot’ guy. He started working on that two years ago and getting after it. I think the adjustment will be good and he’ll do the work and do what he needs to do. I think from playing quarterback here it will just make him a better receiver, too.”

Coming onto the team as a walk-on and looking to not only make the team for the fall but eventually earn a scholarship is the type of adversity that Holmes said Cupp thrives in. As a junior, Cupp suffered a ruptured appendix before the season even began and fought through a high ankle sprain all of his senior season.

“Obviously he will be a walk-on and that is a tough path,” Holmes said. “Everyone doubts you and the chips are stacked against you, but that’s what fits him.

“Having to battle adversity is him, it’s the perfect story for him. There’s no doubt in my mind he’ll make it there and he will earn everything he gets. His mindset and his ‘no quit’ attitude is exactly what he needs to have to be successful in taking this path.”

Cupp has some very simple goals laid out for the immediate future.

“I want to make the 110 (man) roster for fall camp and then make the 70-man roster to be able to travel with the team (on road games),” Cupp said. “I also want to be able to make a difference at Troy University.”