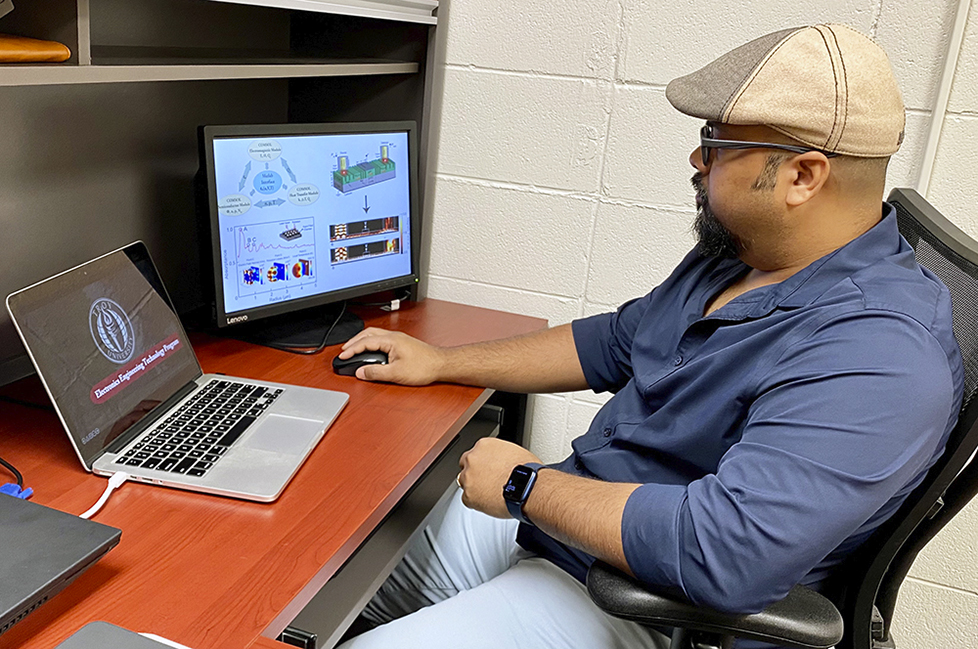 Dr. Raj Vinnakota aims to create an all-optical switch that would allow for faster data processing speeds at the photon level. If successful, the creation would open the door for multiple technological advancements. (Photo by Savanah Weed/Troy University)

Troy University professors continually make advancements in their respective fields, most recently with Dr. Raj Vinnakota’s acceptance of a $161,597 grant from the National Science Foundation to further research building a device that would allow for faster data recording and processing at the photon level. Faster speeds would allow for improvements in optical computing and optical information processing across multiple applications.

Modern digital devices are powered by microprocessors, and the building block for microprocessors is transistors, explained Vinnakota, an assistant professor in the Department of Chemistry and Physics. Data is then recorded and processed in the form of electrons that travel along pathways of connected transistors.

“The microprocessor is built with neuron-like tiny switches called transistors, which are electronic switches where the flow of the current in one channel is controlled by another smaller current, much like a water faucet,” he said. “In a microprocessor, data is encoded and processed in the form of electric currents, which travel along pathways of connected transistors.”

Similar to a delay in broadcasting between a live event and television, data processing speeds are delayed between connections, and Vinnakota’s research aims to create an all-optical plasmonic switch to decrease these delays. An all-optical switch is a device that allows one optical signal to control another optical signal, such as control of light by light.

“The delay time associated for the data transfer between transistors limits the microprocessor’s speed. The advent of the current ‘information age’ needs the capability to transfer and process a huge amount of data in a relatively short time,” he said. “One possible alternative to meet the demand is by using photons—light—as a signal messenger. Encoding and processing the data in the form of photons can potentially push current speed boundary and move forward to higher processing speeds. Having this processing speed at much higher levels gives us an advantage, even if it’s nanoseconds.”

In recent years, nanophotonics, specifically plasmonics, often referred to as “light on a wire,” has established itself as a promising technology for the development of all-optical devices. Despite advancements, a universal fast switching all-optical transistor does not seem to exist or be practical for optical logic gates. Vinnakota hopes to change this.

“The advantage of a plasmonic based all-optical switch is the possibility to squeeze and confine light to dimensions much smaller than its wavelength, resulting in designing promising devices with footprints comparable with the size of modern nano-electronic devices,” he said. “This research effort presents a new, transformative approach toward developing an efficient, fast, photon-to-photon interaction mechanism. It opens a new pathway toward fast and efficient optical devices, interconnects and circuitry, and may further lead to breakthrough technologies…this can be applied to many fields, but specifically to optical sensors and other devices.”

In addition to the possibility to make groundbreaking technological developments, his research has a strong educational and outreach component, including inspiring and guiding K-12 students to pursue a career path in science and technology, improving undergraduate participation in research and providing training and mentoring for a diverse group of students. The grant also has the opportunity to boost Troy’s Electronics Engineering Technology program, of which Vinnakota serves as Program Coordinator.

“This venture opens an avenue for the underrepresented, disabled veterans and low-income populous in the Alabama Black Belt region to participate in the cutting-edge research activities in the field of semiconductor photonics and computational optics,” he said. “New and innovative outreach educational activities and modules will be developed targeting local schools, community colleges and after-school programs, including educational series, both hands-on and lectures, and summer camps on multiphysics modeling used in the current project.”

Vinnakota has published more than 15 peer reviewed papers and conference proceedings in leading journals such as Scientific Reports, NanoPhotonics, Journal of Applied Physics and CLEO. His research is largely emphasized on designing, the study of light coupling with nanoscale, semiconductors with direct application in novel, high-speed processors and sensors.