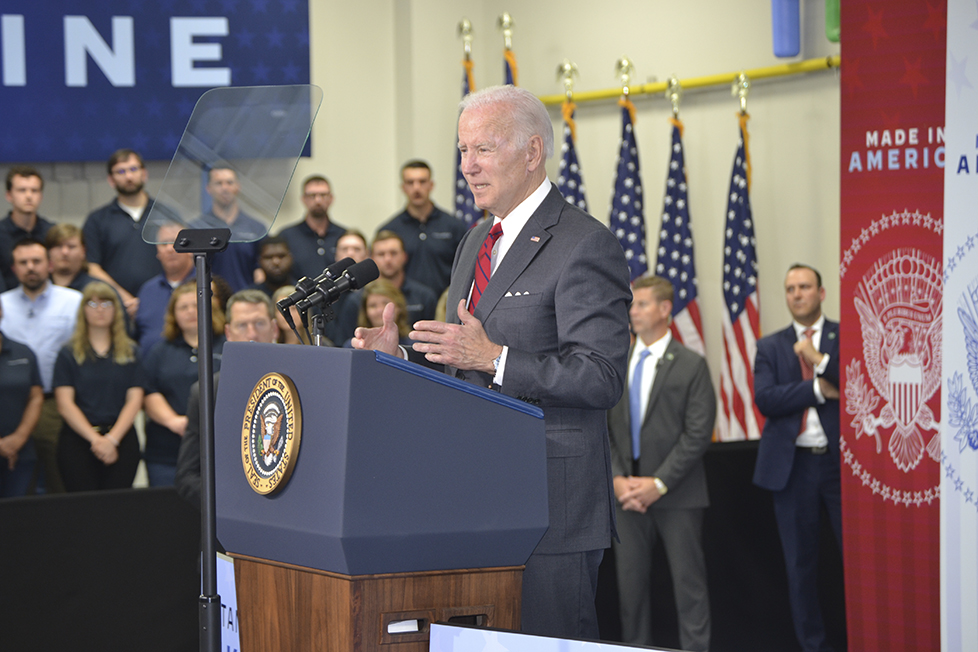 U.S. President Joe Biden made his way to Troy on Tuesday and toured Lockheed Martin’s Pike County facility before giving a speech calling on Congress to pass more aid for Ukraine.

The Lockheed Martin plant in Troy is the production plant responsible for assembling the Javelin missile system, a portable anti-armor weapon that has become well known during Ukraine’s current war with Russia as being one of the country’s most important weapons in the struggle. The Javelin missle is a “fire and forget” weapon that can hit a target nearly three miles away.

“Over the past three months we have been closely watching the troubling situation in Ukraine,” Sewell said. “We know the cost of (Russian President Vladimir) Putin’s costly war and I commend the Biden-Harris administration for uniting our allies and sending a clear message to Putin that America will continue to stand for democratic values by taking the strong steps to hold Russia accountable. Congress has already approved millions of dollars in humanitarian and military economic support but we must do more. That’s why I’m here today to support the Biden-Harris administration.”

Sewell and Taiclet thanked the employees of Lockheed Martin at the Pike County plant for their work in assembling the Javelin missiles. 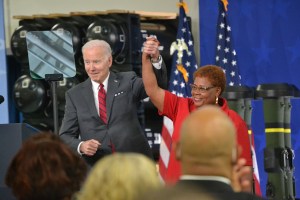 Biden was joined on stage by longtime Lockheed Martin employee Linda Griffin, who is a senior missile assembler at the plant. Griffin noted that she has been assembling missiles at Lockheed Martin for 20 years.

“The American people know what this facility has been doing and the American people support Ukraine’s battle for freedom. The bottom line is I came to say, ‘Thank you, thank you, thank you.’ It’s amazing what you do,” Biden said looking out at the Lockheed Martin employees. “We don’t always see all of the work that makes it all possible. That’s you, that’s not hyperbole. It’s you that makes it possible. You’re doing it. You’re making a gigantic difference for these poor sons of guns that are under such enormous pressure and firepower.”

Biden delivered his remarks in front of a number of Javelin missiles along with Lockheed Martin employees standing under a “Standing with Ukraine” banner. Recently, Biden has called on Congress to pass an additional $33 billion in aid for Ukraine.

“I urge the Congress to pass this funding quickly to help Ukraine continue to succeed against Russian aggression, just as they did when they won the Battle of Kyiv and to make sure the United States and our allies can replenish our own stock of weapons to replace what we’ve sent to Ukraine,” Biden said. “This fight is not going to be cheap, but caving to aggression would be even more costly.

“We’re at an inflection point in history. It comes along every six or eight generations where things are changing so rapidly that we have to be able to control it. There is an ongoing battle in the world between autocracy and democracy. The money is a direct investment in defending freedom and democracy itself. If you don’t stand up to dictators history has shown us that they keep coming; they keep coming.”

“We invented the sucker going to the moon,” Biden said of semiconductors. “We stopped investing in ourselves and so now we need to get back in the game and become the primary producers of those semiconductors.

“We used to invest in ourselves as a nation years ago, 35 years ago we invested 2 percent of our GDP in research and development. Now we invest half of that, we went from first in the world to 13th in the world.”

The president flew to Maxwell Air Force Base on Tuesday before traveling to the Pike County facility via the Marine One helicopter. His trip to Troy was Biden’s first trip to Alabama since becoming president.