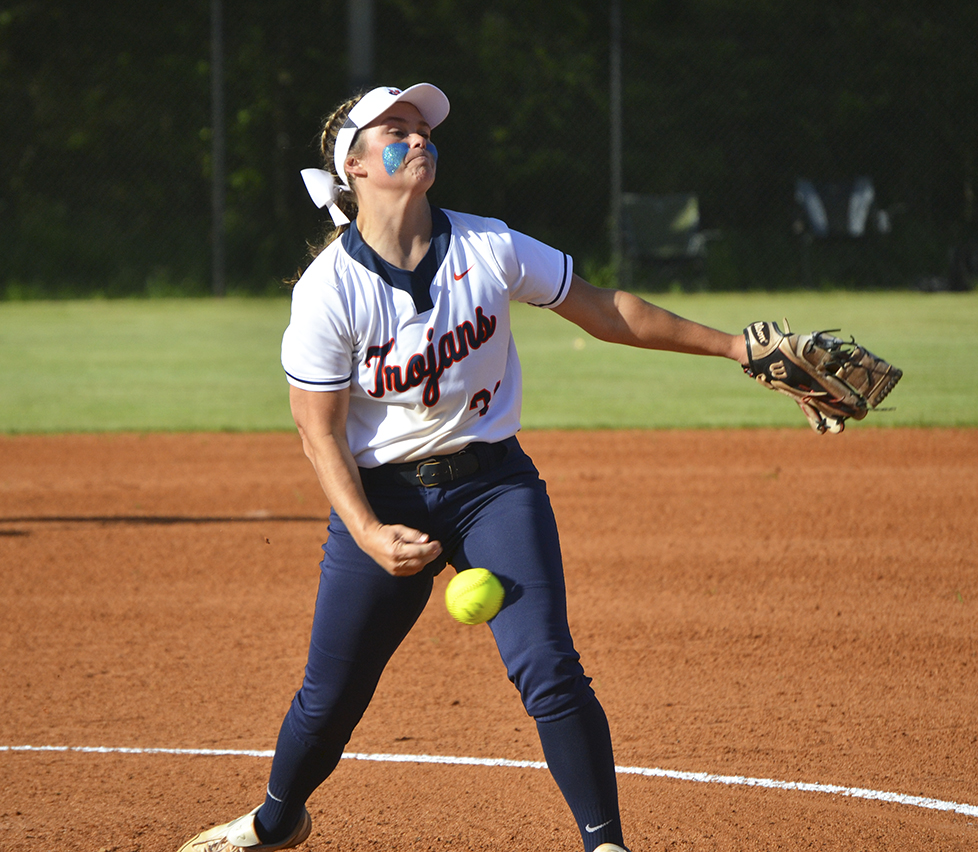 Stella Gilbreath (31) and the Lady Trojans will play Andalusia in the Area Championship tonight. (Photo by Josh Boutwell)

A number of local softball teams in The Messenger’s coverage area competed in their area tournaments on Tuesday, May 2.

The Charles Henderson Lady Trojans hosted the Class 5A, Area 4 Tournament. Andalusia dominated Greenville 15-0 in the opening round of the double elimination area tournament on Tuesday morning and then bested Charles Henderson by a score of 3-2 in the second round.

Andalusia held on to a 2-1 lead going into the sixth inning of the second round matchup when the Lady Trojans tied things up in the top of the sixth. Andalusia extended the lead back out to 3-2 in the bottom of the inning, however, and managed to hang on for the win.

Stella Gilbreath led CHHS at the plate, going 2-for-3 with a home run, one RBI and two runs. She also pitched three innings and fanned a pair of batters, while giving up three hits and no earned runs. Molly Garrett pitched four innings and retired four batters along with giving up four hits and two earned runs.

Next up, Charles Henderson routed Greenville in an elimination game in which the Lady Trojans won 8-0 to eliminate Greenville from the area tournament. Heather Maxwell went 3-for-3 at the plate with a triple and three RBIs against Greenville. Gilbreath also went 2-for-4 with two RBIs. Garrett pitched all seven innings and mowed down nine batters, while giving up three hits and no runs earning the shutout.

Charles Henderson will play Andalusia in a rematch for the area championship, but the Lady Trojans will have to win back-to-back games due to the double elimination rules.

The Pike County Lady Bulldogs also traveled to Opp to compete in the Class 3A, Area 4 Tournament and bested New Brockton by a score of 5-4 in the first round. With the score tied 4-4 in the top of the seventh inning, Pike County’s Mikalah Griffin hit a double into right field to drive home Ivy White for the game winning run.

Amity White went 4-for-4 at the plate against New Brockton with a run. Griffin went 2-for-4 with a double, two RBIs and a run. Kylan Wilkerson pitched all seven innings with seven strikeouts, while she also gave up 13 hits and four earned runs.

In another Area 4 matchup, Goshen fell to Opp by a score of 17-0. Goshen didn’t manage a single hit against Opp. Kaci Wilkes pitched two innings and struck out three batters, while giving up 14 hits and nine earned runs.

In the second round, Pike County was also throttled 15-0 by Opp. Pike County also did not manage a single hit in the loss. Abigail Griffin pitched three innings and fanned two batters, while giving up 10 hits and 14 earned runs.

Pike County and Goshen will now face off in an elimination game with the winner facing Opp in the Area 4 Championship tonight.