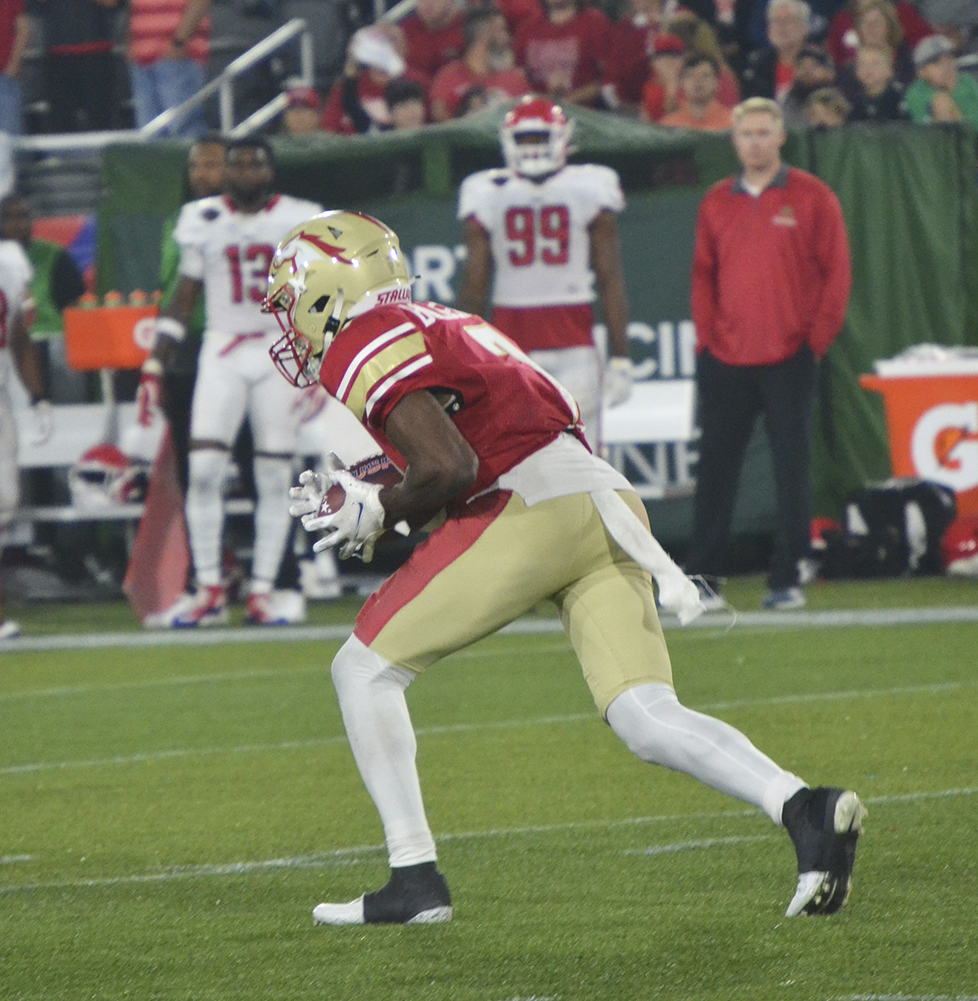 An opportunistic and stingy defense helped lead the Birmingham Stallions (3-0) to a 22-13 win over the New Orleans Breakers (2-1) in a battle of the only two undefeated teams left in the USFL going into Week 3 on Saturday night.

The two sides came into the game with the two top defenses and offenses in the league and for much of the game the defenses stood tall. In the fourth quarter, New Orleans hung on to a 13-10 lead but the fourth quarter has belonged to the Stallions so far this season.

With 8:03 remaining in the game, Birmingham’s J’Mar Smith tossed a 19-yard touchdown to Victor Bolden Jr. in the back of the end zone to give the Stallions a 17-13 lead. The Stallions converted two fourth downs on the drive, as well.

On New Orleans’ ensuing drive, Kyle Sloter was sacked in the end zone leading to the first safety of the season, extending the Stallions lead to 19-13. New Orleans managed to get into field goal range with 4:30 left but the 43-yard attempt was no good. Still, New Orleans got yet another chance with just under three minutes remaining. The Stallions defense stood tall once again, however. Sloter was intercepted by DeMarquis Gates, who returned it 19 yards.

With just over a minute remaining, Birmingham’s Brandon Aubrey booted a 32-yard field goal to seal the win for the Stallions. Aubrey, who never played football until signing with the Stallions, is a former soccer star at Notre Dame and also played in Major League Soccer.

In the first quarter, New Orleans was poised to score on the Birmingham 1-yard line when Sloter was hit and forced to fumble, which was recovered by Gates. Birmingham got on the scoreboard first when Smith threw a 47-yard touchdown pass to former McGill-Toolen star Marlon Williams in the second quarter to put the Stallions up 7-0.

Sloter cut the lead to 7-6 with just over a minute remaining in the first half when he threw a 10-yard touchdown pass to Johnnie Dixon. The PAT was no good. Aubrey booted a 33-yard field goal as time expired in the first half to extend Birmingham’s lead to 10-6 at halftime.

New Orleans took its first lead of the game with 6:15 left in the third quarter on an 11-yard touchdown pass to Dixon from Sloter to put the Breakers up 13-10 leading to the wild fourth quarter.

Smith completed 15-of-38 passes for 197 yards and two touchdowns with one interception along with 59 yards on eight carries for Birmingham. Bolden caught six passes for 70 yards and a touchdown, while Cary Angeline caught four passes for 66 yards. Scooby Wright led the Birmingham defense with 17 tackles and a forced fumble, while Gates totaled 10 tackles, one tackle-for-loss, one sack, an interception and a fumble recovery.

Sloter completed 26-of-47 pass attempts for 240 yards, two touchdowns and an interception for New Orleans, while Jordan Ellis rushed for 90 yards on 25 carries. Dixon caught seven passes for 86 yards and two touchdowns. Jerod Fernandez earned 12 tackles and two tackles-for-loss for the Breaker defense.

The Stallions will host 2-1 Tampa Bay at Protective Stadium in Birmingham this Saturday, May 7, at 6 p.m. in a game that will air live on FOX.