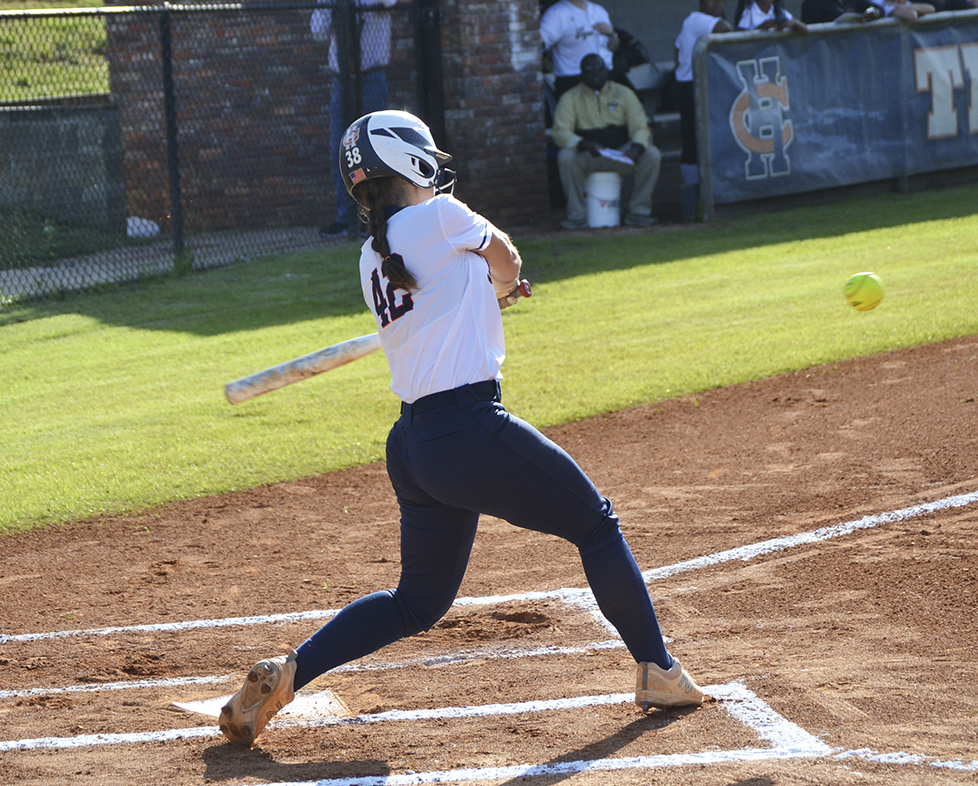 Heather Maxwell (42) went 3-for-5 with a homer against Houston Academy. (Photo by Josh Boutwell)

The Charles Henderson Lady Trojans traveled to Dothan this weekend to compete in the Houston Academy Softball Tournament to close out the regular season.

In pool play, Charles Henderson started off the tournament with an 8-5 loss to Class 7A Enterprise on April 29. Charles Henderson took a 5-4 lead in the top of the fifth inning after McKenzie Cain blasted a three-RBI double into center field. That lead only lasted for a few minutes before Enterprise tied the score in the bottom of the fifth inning and then secured the win with three runs in the sixth inning.

In game two on April 29, Charles Henderson bested host school Houston Academy in dramatic fashion. With the score tied 12-12 in the bottom of the seventh inning, Cain hit a fly ball single into right field to drive Maxwell home for the walk-off run and give CHHS a 13-12 win.

Cain was on fire at the plate for the Lady Trojans, going 4-for-5 with two RBIs, a double and three runs. Meanwhile, Maxwell was an absolute menace at the plate going 3-for-5 with a double, a triple, a home run, one RBI and four runs. Stewart also went 3-for-4 with a home run, five RBIs and two runs. Garrett pitched six innings and struck out six batters, while giving up 10 hits and five earned runs. Stella Gilbreath pitched one inning and fanned a batter.

On April 30, Charles Henderson was eliminated from the tournament in an 11-1 loss to Class 7A Auburn. The Lady Tigers scored 11 unanswered runs after CHHS went up 1-0 in the first inning.

Maxwell went 2-for-3 at the plate for Charles Henderson with a run. Cain earned the only other CHHS hit on the day. Sparrow pitched three innings and retired one batter, while giving up three hits and two earned runs. Gilbreath pitched two innings with two strikeouts along with five hits and seven earned runs allowed. Garrett gave up one hit and no earned runs in her one inning in the circle.